John Ramsay was a friend, a master of geology and of life.

His ability of being an outstanding musician, composer, geologist, mathematician, painter, chef, active sport man, carpenter, farmer and many other things was and will remain a mystery for me. I have not been able to understand how so many skills could co-exist and be developed in one brain.

All those lucky ones that have worked with John have appreciated his modesty and ability in sharing the clarity of his thought.

John has been a true geologist and he was incredibly good in detailed field mapping. His maps are an example of how artistic could be the representation of the nature. John exceeded in his work and he had the rare ability to abstract, to transform the chaotic ground noise of the outcrops, into superior concepts, into laws of behavior thanks to the mathematics that he mastered perfectly.

John has given a lot to geology, to music, but he has also given a lot in terms of human example to all those who have had the privilege of being his students. John was also a source of inspiration to all the scholars reading his books and publications translated into dozens of languages.

Thank you John and thank you Dorothee, a reliable companion throughout your full and long life. 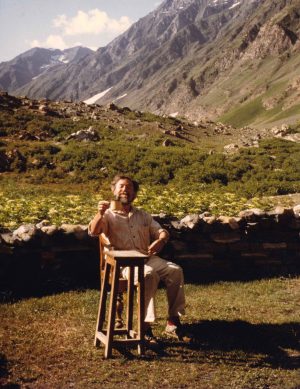