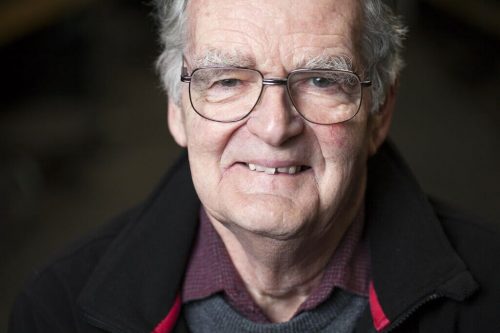 On March 4th, 2021, Fred Teagle passed away aged 80 at Mount Edgecumbe hospice after a battle with cancer. A proud Cornishman, Fred grew up immersed in agriculture, heavily involved in Threemilestone Young Farmers Club, and surrounded by the growing Teagle Machinery business.

Fred lived next to the factory with his wife Dinah and sons Roger and Colin whilst he saw the company expand from serving local farmers to become a truly international business. As a passionate and talented engineer with an insightful, no-nonsense approach, Fred managed the production departments and ran the site at Tuckingmill for many years. Throughout his career he was always focused on continually improving processes and adopting the latest technology. Latterly Fred served as Chairman of Teagle Machinery Ltd., involved with all aspects of the company where his commitment and innovation drove the business forwards. In recent years Fred oversaw the appointment of a management team at Teagle to ensure a sustainable business for the future. Family members who remain as directors of the company include his sons, Roger and Colin, his brother John and nephew Tom.

During his ‘retirement’ Fred still remained on-hand in the business and delighted in the opportunity to share his pride in the company when hosting open days or guiding factory tours. Fred recently co-authored the company’s 75th anniversary book, sales of which raised more than £12,000 towards the Cornwall Hospice Care, of which Fred and Dinah were committed fund raisers.

Fred was proud of his Cornish roots and was always supportive of his family and friends. He was an accomplished small-bore rifle shot and was heavily involved in the City of Truro and Cornwall county rifle clubs for more than 50 years. He will be much missed by his sons Roger and Colin, his grandchildren Sam, Jenna, Alex, Amy and Adam; and his brothers David and John.

Happy memories of good times with Fred and Dinah.  A true Cornishman, such a loss to us all. …
Read More

A true Cornishman, will be sadly missed by so many.  I will always remember his kindness and friendship. …
Read More

My thoughts are with the Teagle family. I had the great pleasure of being taught to shoot in my late teens by Fred, a wonderful man who cared so much about the rifle club and its members, clearly a passion for passing on knowledge (and wit!) that I’ve yet to see surpassed. Very saddened …
Read More

Roger Pascoe and Sue Weedall We wish to send our deepest sympathy and condolances to all of the Teagle family, it was a great shock to hear of Fred’s passing. I have known Fred from joining the City of Truro Rifle Club in 1990 and have always enjoyed his company and admired his skill …
Read More

We were so sad to hear about Fred passing, I met him originally at the shooting club where he taught and helped so many of us. He would always have time for anyone that needed it. Even outside of the club working for him and the company Fred was quite the mentor and friend, …
Read More

Clive and Richard would like to extend their condolences to all of the Teagle Family. We met Fred on many occasions and it was a pleasure to have known him.  His passion for his family and friends was clear for everyone to see. Rest in Peace. …
Read More

We sadden to hear about demise of Mr Fred. A humble , happy gentleman, walks into our petrol station everyday for news paper, never show off and treat everyone with kindness. RIP sir 🙏 …
Read More

Our sincere condolences to Fred’s family. It was in 2017  returning from Australia that my husband and I met Fred again.   Memories of the days in Threemilestone Young Farmers Club are a fine endorsement of everything Fred was.  So much he had done for the Club and a very fine person whom we are …
Read More

Our thoughts are with the family. What a great man, full of great information and inspiration for shooting. Great times at Bisley and Scotland. Will sadly be missed  …
Read More

Words can not express, my sincere sympathy for you all,  I look back at all the wonderful times at Bisley, shooting weekends, and feel blessed.  I hope you can as I do draw strength from the wonderful memories.  My thoughts and love are with you. …
Read More