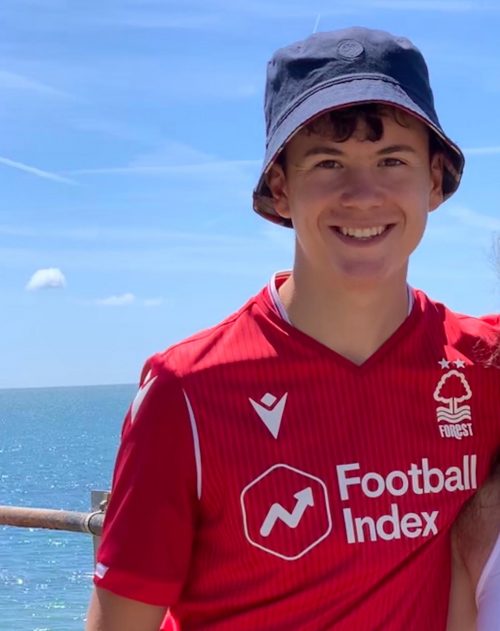 The news of the tragic passing of Dylan Rich on Sunday September 5th, after he fell ill in our FA Youth Cup game on Thursday,  has left everyone involved with West Bridgford Colts FC devastated and heartbroken. Our thoughts and prayers go out to his parents Mike & Anna, his sister Lucy & Dylan’s family, friends and teammates.

The club would like to thank everyone within the Colts and wider football community for the hundreds of heartfelt messages and thoughts that we have received over the past few days. We have now set up this Book of Condolence so we can gather messages from the football family together in one place.

The ‘cultured left foot’ may be a football cliché, but it sums up Dylan to a tee. From a young age he was a talented all-round player, equally at home picking a pass, putting in a sturdy challenge or going on a trademark dribble. Last ditch tackles and calm finishes were both part of the package.

He was one of those players that team mates love for his commitment, coaches for his attitude and adaptability, and supporters for his reliability. A fantastic club player.

Rest in peace Dylan – your star will continue to shine.

We are 15 months or so on from the passing of Dylan and I just wanted to write a message saying that it is still affecting many of us. Dylan and I were good friends, along with Jonah and we all met at the CIS camps in bath each year. Dylan was a truly …
Read More

Dear Mike, Anna and Lucy, Like everyone from both the St Giles and the WB Colts family, we were absolutely devastated to hear about Dylan, taken far too soon. He was such a fine young man in every way, with the whole world before him, and words simply cannot express how sorry we are …
Read More

We wanted to pass on our deepest and heartfelt condolences to Dylan’s family. Grace and Dylan were in the same year at WBJS and WBS. We all remember how much he gave to representing juniors across all sports. The sadness of his death has been felt across the whole community and we wanted to …
Read More

I don’t think I’ve ever played with anyone who wanted to run more for the team than you Dylan. I will always remember that goal you scored towards the end of last season against Arnold and Leigh shouting “Dylan it’s just like Gazza in 96!” Happy memories. Your passing will leave a heartache that …
Read More

Dylan Rich. I didn’t know you personally but I am sure you were an absolute baller. Your sister Lucy, was one of a kind on the pitch herself, and I’m sure it would’ve ran through the family. I’ve never met a family so pure, generous, and dedicated to the beautiful game, and sports in general.  …
Read More

Dylan Rich Being a football manager myself this brought home a strong message,& having young children.Such a young man taken so suddenly & leaving a missing piece in your family’s life.May god keep you safe in his peaceful garden.May god give your family/friends & West Bridgford Colts FC,comfort in this sad time.I pray for …
Read More

Words can’t express the sadness felt that a young lad playing this wonderful sport of ours should be taken away in such a way My thoughts go out to Dylans family, friends and team mates on such a tragic loss RIP Dyjan and God bless   …
Read More

Firstly I would just like to say that my thoughts and prayers goes out to Anna, Mike and Lucy on tbis very difficult time and also to Dylan’s further family who we all want to make aware that there is support for them everywhere as I know many people have been affected by this …
Read More