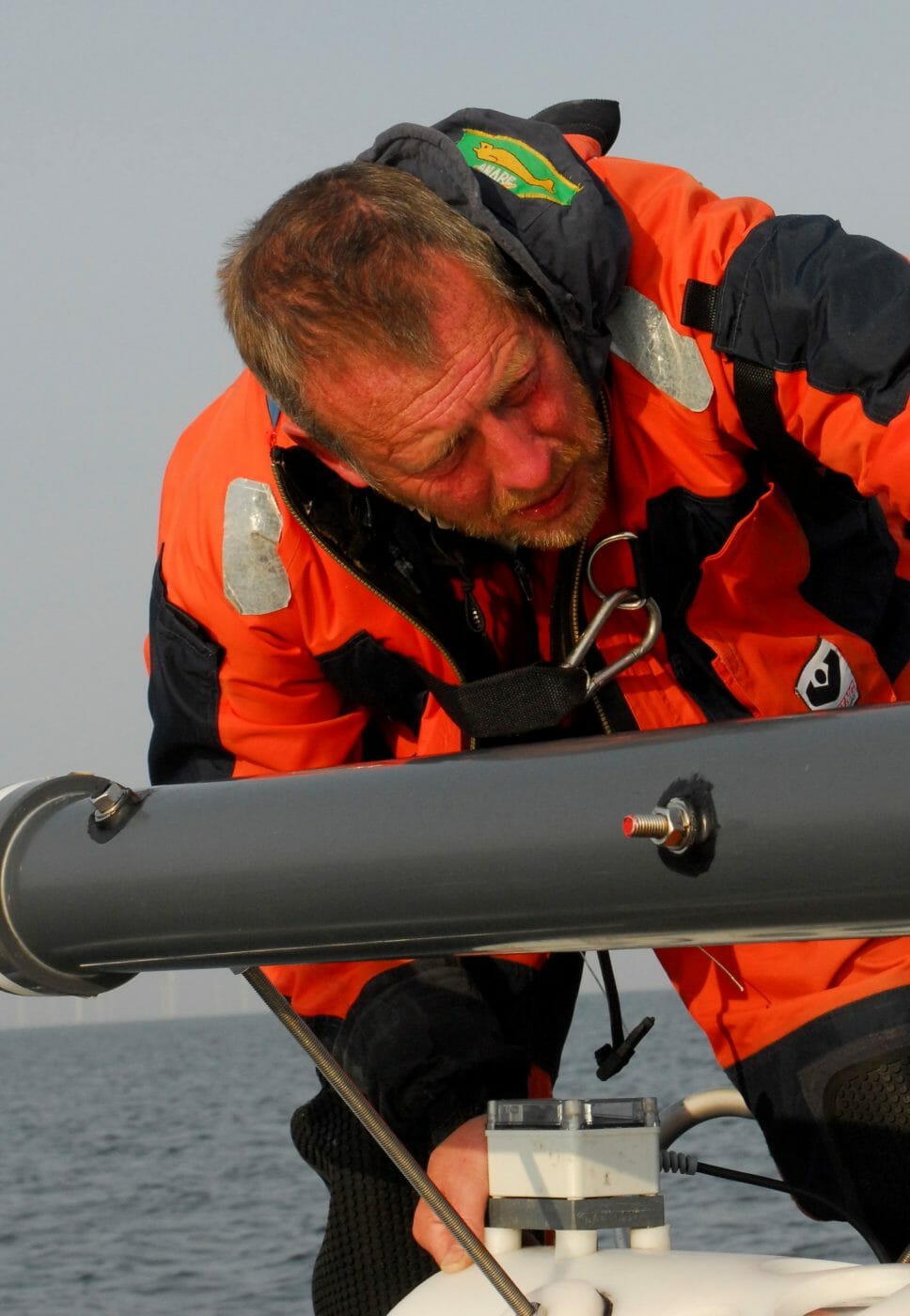 Sunday afternoon 31th of October it struck me again like a lightning from a clear sky, we need to get started on the book “Handbook of crazy seal capturing ideas” which I had been talking to Bernie about so many times. We also had a report to Crown Estate published back in 2012 entitled “Interactions between seals and offshore wind farms” by McConnel et al., which I had been bugging Bernie about turning into an article before I also go on pension, which is my plan in February 2024. Monday the 1st November I got rang up by Jacob Nabe –Nielsen with the horrible news. Bernie got struck by a heart attack yesterday riding his bike with some friends, and unfortunately he is no longer with us.

From 2010 we again were conducting seal tagging at Rødsand in connection with a The Crown Estate project on studying Interactions between seals and offshore wind farms whre we deployed transmitters on Grey and harbor seals with SMRU and Wildlife Computers tags. In

As rødsand is on of the hardes places in Denmark to capture seals we already knew from previous work on the EIA work on Nysted Offshore Wind Farm due to the local permission to hunt seals near the fishing fykes where 18 seals are allowed to be shot annually. The problems related to the seal capturing is reflected in the acknowledgement of the Crown Estate Report where it reads: “This study would have been impossible without the tenacity, enthusiasm and skill of the various members of the catching team from the Danish National Environmental Research Institute (now Institute of Ecoscience, Aarhus University). “

During our tagging work in the Rødsand area in 2000-2002 we had tried to approach the seals by sneaking in on them on land and swimming in on the seals hauled out on land. As this didn’t work we had tried to lie down in the banana shape which made the seals puffing our feet with their noses and as this was not successful we borrowed a stuffed ringed seal from Zoological Museum in Copenhagen to lie with us to attract the seals. The day we tried this was not to well chosen as the 10-12m/s wind made the seal, stuffed with lightweight flamingo material, shiver so vigorously and finally take of on into the sea which the seals found rather amusing but never made them come on land and haul out with us allowing us to capture them by hand.

Bernie quickly figured out our mistake as we should have brought more than one seal and bring steel bars to fix the seals into the sand. As a man of action Bernie brought three homemade seals with him on the next capturing event seals that he had sculptured again in flamingo in his backyard together with one or both of his sons. Unfortunately, these seals didn’t attract seals either to the hauls out site, either because the Rødsand seals are very clever or because the seals were not that well imitating real seals (judge for yourself on the photo below) 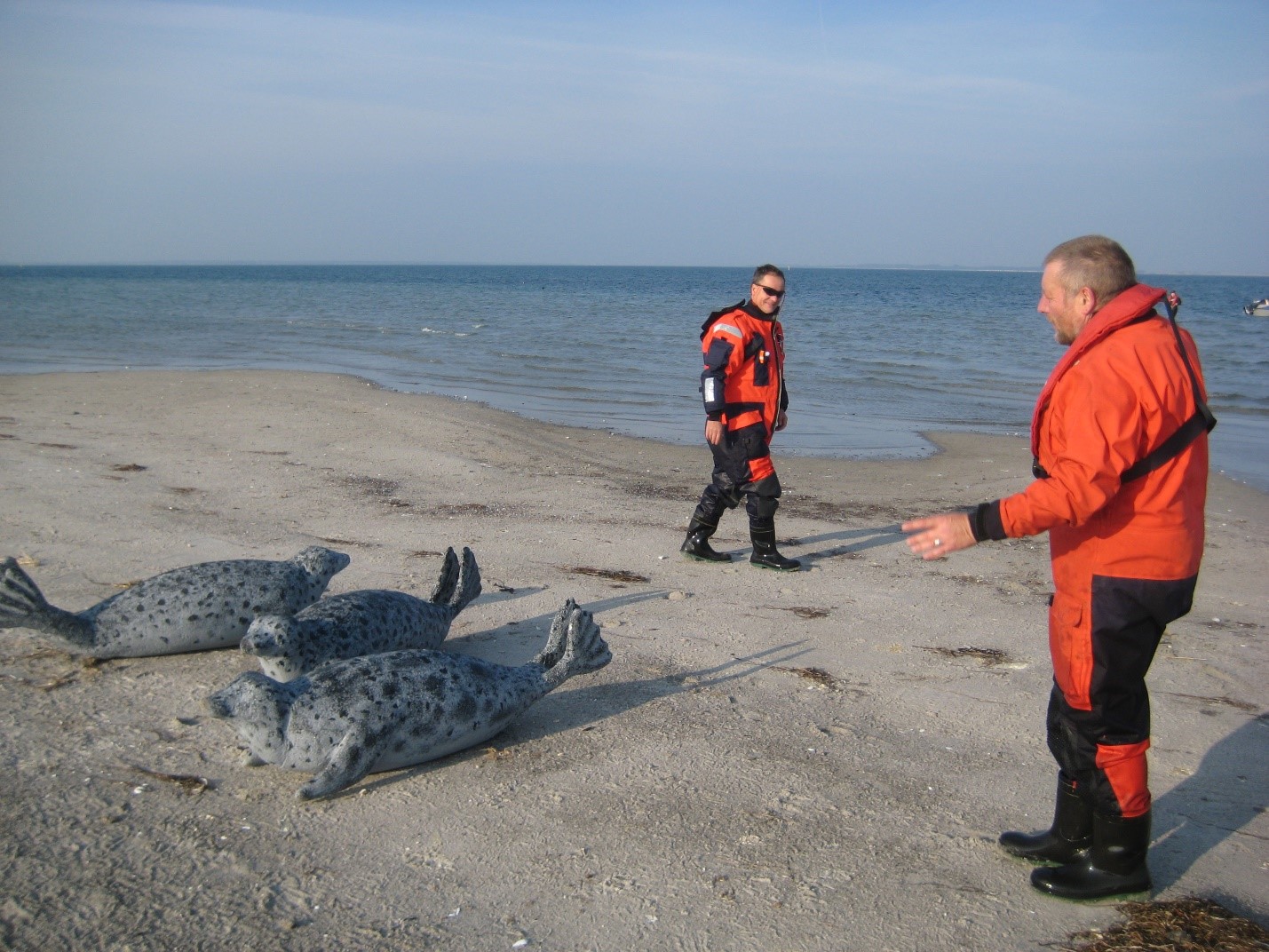 Three decoy seals on the Rødsand haul out site ready to attract the local seals from the area.

Another genius idea was The net Surprice. Again Bernie was the Man of Action to bring this idea into reality together with the technical staff of SMRU. This invention was simply to place a 3 m deep net with an inflatable float line into a 100m long Velcro closed nylon sausage anchored to the sand bottom by chords attached to a heavy galvanized iron chain. A diving tank was then simply connected to a floating remotely (up to 500m) operated pressure valve that was initiated by a handheld remote controller. To constrict such a device would have been a lifelong challenge but for Bernie and his technical staff this was an easy task. Actually the equipment once brought us 5-6 seals in one catch on a beautiful Octoberday in 2009. However, afterwards the seals figured this out and never hauled out in front of the Net Surprice. I guess that it is needless to inform the audience about the work that was needed to transport, set up, bringing the equipment back on the boat and on land, into the car and repacking the Velcro sausage so it would work properly the next time. 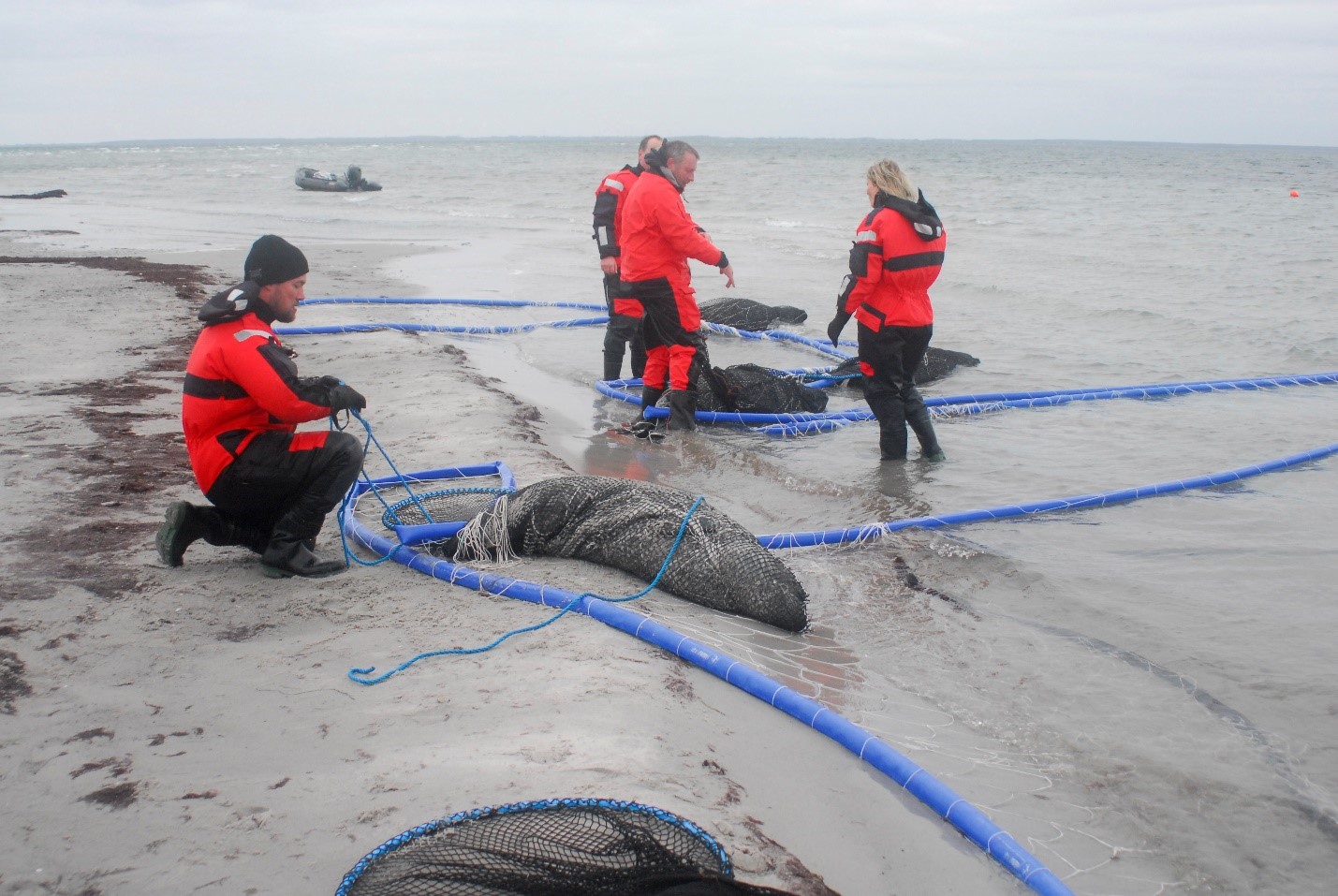 The last of the three nice attempts I will mention here is the Net Submarine. This was another were genius invention brought into life by Bernie and his technical staff. This construction was simply a remotely operated sub-surface floating catamaran device with a central cone carrying the net with float and lead lines also to be released and set remotely around the seal haul out site. The unit was sailing with two underwater motors. Again, this was an impressive innovative construction that just fitted into SMRUs VW van. The building of this must have been quite time-consuming and expensive. In order not to make our intelligent Rødsand seals suspicious the antennas of the Net Submarine was hidden within a gently swimming duck followed by a white swan. The only reason why this fantastic invention didn’t become theee major success of the year was that we needed to deploy and operate the Net Submarine from a distance of some 500m from the suspicious seals at Rødsand haul out site, which was a major challenge for the sailing battery, the range of the remote control, the ability to know when the Net Submarine was at 2-3 m’s depth at the right spot relative to the haul-out site and exactly know how to sail duck and the swan decoy disguised unit around the seals on land without scarring them prematurely into the sea.(again a few photos may help to explain the innovative construction). 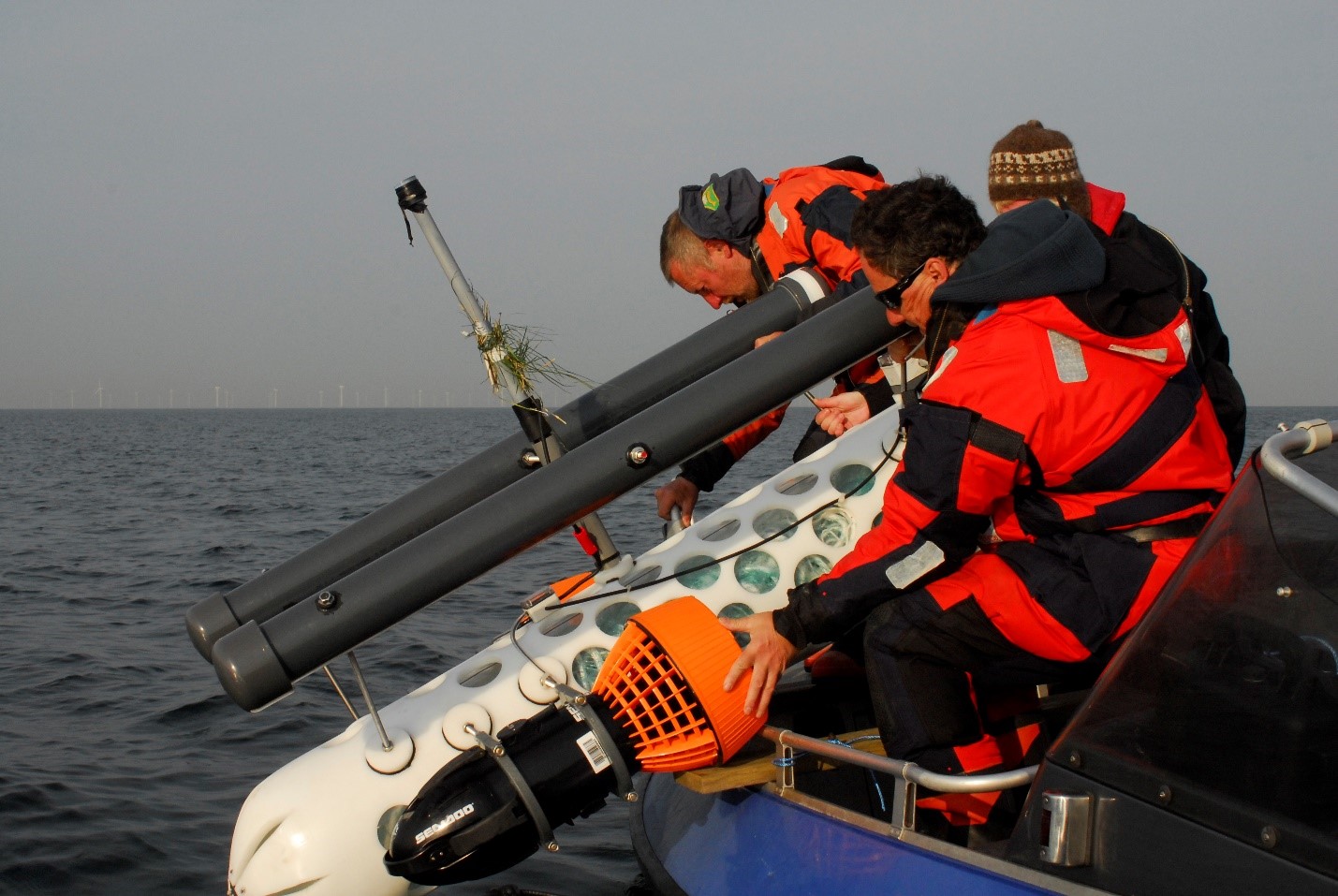 Safe deployment of the Net Submarine some 500m from the suspicious seals at Rødsand haul out site in 2009.

With lots of love from Rune 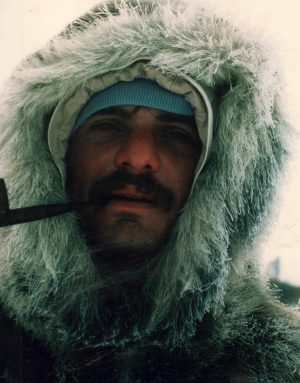