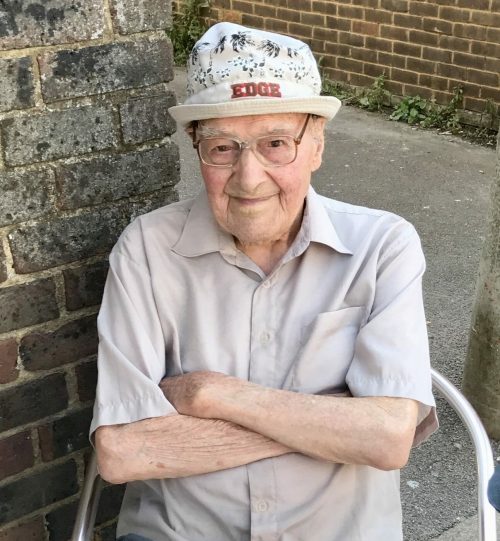 A veteran of the Royal Army Medical Corps (RAMC), William played a vital role on the battlefields of North Africa and Italy during the horrors of the Second World War.  His remarkable story was later captured in author Liz Coward’s acclaimed war memoir, Blood and Bandages.

Renowned for his “gentleness, humility, humour and selfless courage,” William was born on May 12th, 1915 when homes were without electricity, cars were a rarity and there was no NHS. The First World War was also raging on the Western Front.

On 12th May, the Germans had just torpedoed RMS Lusitania off the coast of Ireland killing all 1,198 onboard; troops were fighting to emerge victorious from the second Battle of Ypres and Herbert Asquith was the British Prime Minister. In 1940, aged just 25, William was soon to experience the bitter taste of war himself, following the historic evacuation of Dunkirk. Newly in love, William – known as Bill – left his wife-to-be and later their first child to serve in the RAMC.

He returned in 1945 after three years of service, and re-joined Boots the Chemist as a dispensing pharmacist. He remained with Boots for 33 years and, upon his retirement, was invited to attend the Queen’s garden party to celebrate 50 years of the NHS.

William played an active role in his local camera club, horticultural society and community centre. He had an abiding love of classical music and was the vice-president of the Mario Lanza Foundation Trust which helped fund aspiring singers.

When in his 90s, Bill shared his war story with his co-author and friend, Liz Coward, and the subsequent memoir, Blood and Bandages – fighting for life in the RAMC Field Ambulance 1940-1946, was published in 2017.

Blood and Bandages gave Bill a new lease of life which culminated in a trip to Italy to take part in the BBC documentary, Gary Lineker: My Grandad’s War. He was 104 at the time. Within days of his death, part of his story was featured in We Have Ways of Making you Talk, a WW2 podcast, hosted by Al Murray and James Holland.

Liz Coward said,  “Bill was gentle, humble, humorous and courageous. He showed tremendous commitment and never failed to rise to the occasion.”

He will be sorely missed by family, friends and those whom he inspired.

A summary of Bill’s remarkable life story is highlighted below: