It is with deep sadness that I learned of the death of Her Majesty Queen Elizabeth II.  She was an amazing woman and leader, the only monarch that many of us have ever known, a constant and impactful presence on the lives of so many people. A leader respected and admired around the world.  Someone we had come to childishly believe would live forever.

Over the years I have had the privilege of meeting the Queen at various occasions – at my investiture and charity functions at the Palace, events in Norfolk, and Commonwealth receptions.  I recall fondly the warmth and humour which she radiated whenever we met.  Her curiosity at what brought me to Britain from Canada, and her interest in the various roles that brought me to her attention.

More formal messages will be conveyed from the University, but here may I send my sincere and personal condolences to our chancellor, the Princess Royal, and to the Royal Family. 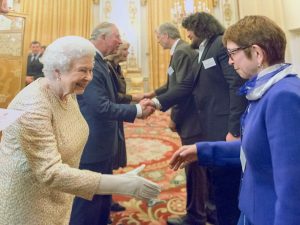