Having known Clive for all 23 years both as a colleague and his line manager, so many memories …………

One day walking back from a work event on Ravens Ait, he tripped along the towpath and I saved him just in time, before he fell into the Thames.  On another occasion, he won 2nd place in our team wall standing squats competition!

We were both quite feisty in our younger days and much more mellow in later years  but we never had cross words or had a falling out, despite him cheekily calling me ‘dragon lady’ and telling me to ‘chill babe’ always with one of his famous smiles. He definitely had a certain unique charm about him.

As the years went on, he’d often tread on my toes, especially painful when wearing sandals and rarely held the door open for me but he was a true gent.

Sometimes I’d be his secretary, offering to type up work things for him, especially when he was struggling with his hands and once calling the AA for him when his car wouldn’t start.  But he returned the favour by undertaking and achieving so many successful projects that I was hugely thankful to him for.  He was an extremely hard worker, who always went above and beyond, where nothing was too much trouble. I even managed to convince him to take on the ‘packaging’ role for me at very short notice, which he undertook very successfully.

Any issue asked of him, he always managed to find a resolution or workaround and never gave up until he had. It helped of course that he didn’t like to throw anything away, just in case anybody needed anything!

At times I felt like Clive was my work husband but didn’t realise maybe he thought the same ….. the day before he went to work for John in 2019, he said to me ‘that’s it Viv we’re divorced now’ my reply being ‘never divorced Clive, just separated’ which made us both smile.

Even after not being his line manager, we’d still chat when I popped into the buildroom, (now renamed Clive’s Room by the DCS Team in his honour) and other times by phone, some intense work related conversations and others a little more chilled.  We’d also chat about family, friends and other subjects but hardly ever was it a short conversation!

I’ll always remember him for his beloved leather jacket, his hair that grew outwards when it was too long, drinking bottles of coke, our joint love of Dell hardware, his love of basic mobiles and shirt pockets full of pens despite him working in IT and much much more ………. one of a kind, who I miss very much.

My condolences to his family and close friends. 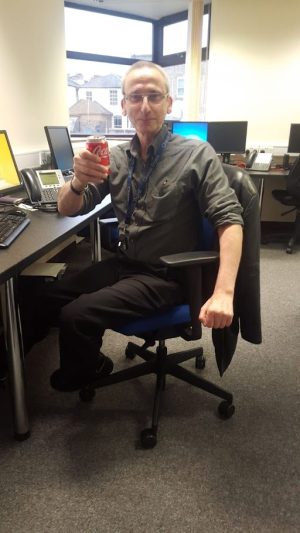