Simon’s name is written into the archaeological records here in Italy through this classification of amphorae. He always seemed somewhat embarrassed by this when students and colleagues met him for the first time and asked him to look at some fragment of amphorae. But Simon took this in his stride with that glint in his eye! But it was his love of Portus and his championing of the site that will be the most remembered in Rome and further afield. I had just taken up an archaeological assistant position at the BSR in 1998 when the project launched, and little did I know I would still be working on the site 23 years later. Simon achieved so much with his colleagues over the years, from the publication of the ‘Portus’ volume of the geophysical surveys through to the excavations. The online MOOC opened up the site to a global audience, as well as his appearances on various TV documentaries. His enthusiasm for the site was endless and it was always a struggle to get him off-site in time to catch his flight home from the neighbouring airport. Simon was a constant figure at the BSR for many years, latterly as the Chairman of Archaeology, but in reality, he always saw himself as just part of the team, forever generous with his time and knowledge. His legacy here is immense which we will do our utmost to honour. 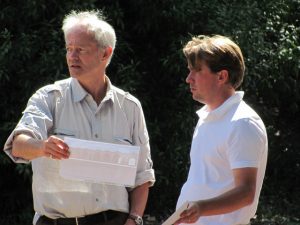