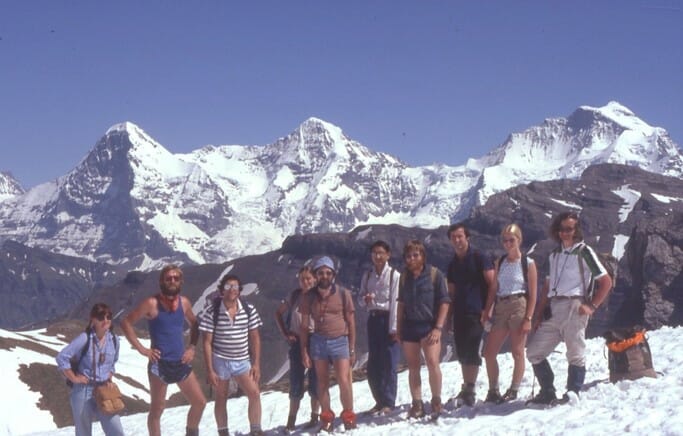 John was a giant in the field of structural geology—everyone who interacted with him throughout his career knows that.  But there were multiple dimensions to his greatness.

First, as a field geologist, and as attested to by many others on this memorial site, John was perhaps the most outstanding field structural geologist of his time or of any time.  His field techniques and resultant maps of the Scottish Highlands were a breakthrough in the recording of observations and communicating them through documentation on maps.  Those of us who were fortunate enough to view his original field maps were literally “blown away” by the level of detail, the quality of observations, and of course by the interpretations that resulted from these maps.  Later in his career, John extended these field techniques to incorporate a new generation of geometric features: tectonic extension veins, incremental strain markers, etc.  He was innovative in breaking new ground in so many areas of structural geology. John’s observational powers were developed far more insightfully than anyone else I have ever met.  On one field trip to the Northern Appenines, a group of 20 of us were looking at an ophiolite complex—with discussions ranging from rock type, to isotope geology, to stratigraphy.  After everyone had had his/her say on the matter, John opined forth with the most basic of observations:  “Has anyone  else noticed that these pillow lavas are all upside down?”   An observation that had eluded all the others.

Second, John was a great communicator and teacher.  His entire career was dedicated to the transfer not so much of knowledge, but of teaching the significance of observations in the field and of course also in the classroom.   John’s methods were not to dictate, nor lecture at his students.  Rather he enabled his students to think for themselves.  John measured his teaching success by the progress his students made in discovering things for themselves.  In essence, John was a teacher of the process of discovery—this is of course basic to the scientific method.  And the record shows just how successful he was in this regard as his students and colleagues who studied with him became the “who’s who” in the fields of structural geology and also tectonics.  His influence on this subject area has no peer in the last 50 years.

Third, John was a fabulous researcher.  Although he collaborated with so many different, and excellent, peers throughout his career, the hallmark of John’s career was the undeniable fact that he pioneered so many approaches to structure and tectonics alone, without major influence by others.  This is not to assert that he was a loner.  Quite the contrary, most of John’s publications are co-authored.  However it is his early and pioneering singly-authored publications, and his later books, that stand him apart from others.  Of great distinction is the fact that the scientific material within his books (both “Folding and Fracturing of Rocks” and the later series “Techniques of Modern Structural Geology”) consisted almost entirely of new and largely unpublished research.  For this multiple generations of his peers are forever grateful.

Not everyone is aware that geology was not John’s only passion. From an early age he became a dedicated cellist but his musical career was always subjugated to his geological career.  Despite the time limitations imposed on himself to focus on geology, John was a consistent player of classical and folk music.  His talent in this area was also immense.  As an example, I once collaborated to try and play a duet with John—he on cello and myself on clarinet.  The trouble was that there was nothing written for these particular combination of instruments.  Not a problem for John.  Overnight, he found a score, and transcribed the music from one clef to another so that the two instruments could be played using different scores.  He did all this without the aid of modern computers, writing out the notes by hand.  Who knows how far he could have gone had he dedicated his career to music alone.

We will all miss John very much but his record of achievement across all these disciplines will forever remain.