I met Bernie when I was finishing my PhD with Sheila Anderson before SMRU ever thought of moving from Cambridge to St Andrews. He dragged me into his office after he overhead me talking earnestly in the corridor with a ‘Have you got 2 minutes’ An hour later we reconvened to the pub where we continued animated discussion into the wee hours as he honed my ideas amid multiple digressions. This pattern repeated itself over the years, in various countries, for over 30 years. Along the way he taught me much about science, Scottish heritage, Crail, whisky drinking and old wooden boats, shared laughter, misadventure, occasional seal catching, and throughout he never ceased to produce the most amusing yet brilliant talks at whatever meeting we were at. He is the only person to ever successfully persuade me to wear a dress, for a, for me unforgettable, Gatty Christmas sketch

In 2008 after biologging in California we rented some kayaks for a paddle around Monterey harbour. The owner suggested we grab a lifejacket each from the rack, and Bernie and I both automatically picked XL jackets. The owner asked in horror what were we doing and we pointed out we were both fat bastards, hence the XLs. He retorted ‘you two are barely medium’ and ever since the two of us embraced the catch phrase ‘I’m just a medium’ whenever we met. But Bernie, you were never a medium, you were in every way larger than life, you had a superb intellect, a phenomenal wit, an unceasing passion for life and most of all, the hugest, the kindest of hearts. I miss you. 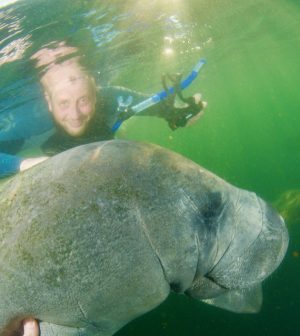