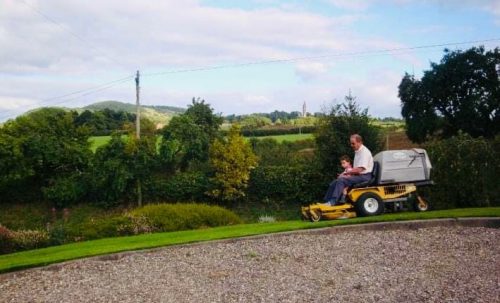 Aside the overwhelming grief that many of us are feeling incoming to terms with Dads passing, I also feel happy that Dad has been freed from his suffering.  His stoic resilience shown over a very difficult four weeks in hospital and 10 months of battling with the side-effects of the cancer will be a inspiration that will stay with me though my life.

As hard as it was to see him fighting his symptoms in hospital, it was great to see him remaining true to his character until the end, interacting on a human level with those that were looking after him showing both gratitude and interest in them as people.

Dad had a wonderful way with people of all ages and backgrounds, he gave so much time to causes he believed in and always made time for other people before himself.

This photo of Dad (Grandad) was a common view when the boys were younger and fills me with so many happy memories of him at Old Yates.

Purely by coincidence there was a brass band playing for another resident at the hospice a few hours before Dad passed away.  I’m sure that the music played would’ve been of great comfort to my dad in his last few hours of life, so I took a video of one of the hymns played