Ian and I were together for 32 years. We were soulmates and equal partners. Ian’s sense of adventure and confidence in taking on what life had to offer him gave me the confidence to do things -take on new challenges and gave me a positive outlook on life which changed me.

We met when we both worked at Gateshead Council- I was the professional advisor to the Adoption panel and he the legal advisor. Our first date -was me watching him play the lead part in a play where he spent the entire 2 hours performing from a hospital bed. He jumped out to take a bow – stubbed his toe and hopped and yelped round the stage for an eternity. We both loved the theatre and performing so Ian suggested that we needed to do it properly. So, we enrolled on a Btech in performing arts with a bunch of other social workers. While they all passed, we failed because we did not submit any written work – loved the practical though.

We got married when I was 38 and he 42. We went round the world for our honeymoon and catered for the wedding evening buffet with a dish from every country we visited – Ian spent hours cooking and we froze it in Alistair’s mum and dad’s freezer. He loved cooking for parties -and would spend hours on it – with precise ingredients – whilst listening to loud music and messing up the kitchen. He loved dinner parties where he would stay up till late at night having discussions about vast topics.

Ian loved working in the legal department of 3 large local authorities. He loved being in the centre of gossip and intrigue – the variety of the work and making a difference to children. He took voluntary redundancy about 12 years ago and was fortunate enough to get the opportunity of a second flexible career as a chair of Tribunals for fitness to practise of doctors, health professionals and social workers. He loved this work not least because it gave him the opportunity of staying in posh hotels and took full advantage of what London and Manchester had to offer. When we were apart, he used to check in 4-5 times a day which was a standing joke amongst friends and family.

We became parents when Ian was 44 to two children Syimah (aged 5) and Hassan (aged 2) He had an unconditional commitment to both children and grandson Harrison. He loved being a dad and getting involved. WE shared tasks equally and his clear and pragmatic thinking helped us with some of the challenges that parenting threw. He had this philosophy that he could never go to bed on an argument.

He was very committed to adoption and was on national adoption legal groups and for 8 years a trustee of After Adoption UK. This was recognised by the Queen and he was invited to a garden party at Buckingham Palace. He was an ardent republican and I thought he would turn the invitation – down. – not so -he accepted it immediately said it was a social experiment and he had a right to the cucumber sandwiches as he was a taxpayer.

Ian had a great zest for life and wanted to do things that most people would just dream about. He had a long bucket list and he achieved most of what he wanted to. He climbed Kilimanjaro when he was 60. He had a long 70 th birthday celebration – he went on his own to North Korea, we did a 70-day tour of Australia and New Zealand and had a surprise birthday party attended by over a hundred friends and family where a band of other over 70’s known as Gerry and the Attricks entertained us – Ian loved it.

He was active and adventurous -did the New York and London Marathons and the – Great North Run numerous times with a fag hanging out of his mouth. – the time was never a factor -finishing was more important. He gave up smoking at the age of 40 after two sessions with a hypnotist – which was incredible as he was not a suggestible person.

He would say yes to anything that was offered-a real gung-ho -can do attitude to life. Whilst working in Gateshead he was the subject of a 6 week fly on the wall documentary called Lawyers on the work of a local authority lawyer. He loved wandering round Gateshead Civic centre followed by the camera team.

We built our own house in Leeds (we did not actually lift a finger ourselves -with neither of us being particularly interested in DIY – Ian certainly was not a handyman). He responded to an advert for us to be part of another documentary called House Proud which followed the progress of the build – the children were mortified -called us sad showoffs.

We had lots of adventures together went to places that were on Ian’s bucket list. We travelled 3 months of a year since we became empty nesters. Ian wanted to do lots of things (just talking about it made me feel tired). I just used to drive him places and sunbathe or read a book while he did what he wanted to do – diving in the great barrier reef, zip wiring in New Zealand walking part of the Great wall of china, climbing Ayrs Rock, walking in the Yorkshire Moors and the length of the Leeds/Liverpool canal (not all in one go) and walking in the Pirin National Park from our apartment in Bulgaria. The last year of lockdown gave us the opportunity to spend time together at a slower pace -try new things – Ian learning how to play ukulele and listening to his vast music collection, reading new books and slobbing in front of the telly watching box sets.

Ian I will miss you and loved you very much – your zest for life and can-do attitude to life changed me as a person. You gave me the confidence to try new things. You were my soulmate and my best friend and my equal partner. We shared a lot both professionally and at home and I feel that I have lost my right arm. This last year of lockdown made us grow closer and I will cherish that. You went too soon when a new chapter in our life was just beginning. I feel very fortunate and privileged to have been your wife and our life together – thank you my love and rest in peace. 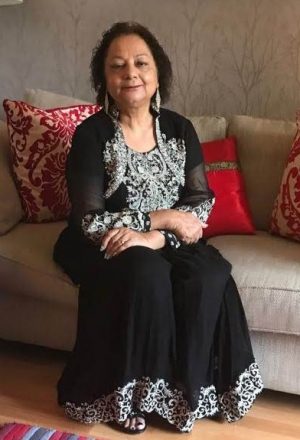