I first met Rod when he arrived on 213 Squadron (RAF Bruggen) in Germany in October 1967, flying the Canberra B(I)6, two years before the unit was disbanded when he was posted to 14 Squadron at Wildenrath on the B(I)8. They were carefree days, single officers most of us but Rod was different! He was married and entitled to a married quarter on the base having just achieved the grand age of 25! Party time and eggy-bakes at the Newman home. We were very happy to welcome the newly married couple, Margaret was a lovely addition to our squadron.

We rushed around the skies mostly at 250ft, a little higher at night, dropping small 4lb practice bombs intended mostly for designated MOD ranges throughout NATO, and fired off our lethal, but fun, Hispano gun pack when it was hitched to the underside! On our daily flying we visited low flying areas throughout West Germany and other NATO countries including several in Scotland, Wales and England. The prize from Wales was to return with a carcass of fresh Welch lamb loaded securely in the bomb bay followed by a high level return to ensure it remained frozen for the ‘profitable’ divi-up back at base. On ‘lone rangers’ to the Med we returned with five litre pitchers of Keo brandy and wine from Cyprus, the same from Italy and Greece, no tarriffs, customs or trade barriers in those days!

I sadly lost touch with Rod and Margaret after the disbandment in 1969. I did know that Rod had been posted to Newton and then on to RAF Woodvale in Lancashire but our professional paths never crossed again due mainly to differing aircraft types, and the UAS location in the north west and my own on the Phantom FGR2 in Lincolnshire. We did meet again during a brief refresher course at CFS RAF Leeming on promotion in 1978. We were able to catch up on Rod’s new life on MUAS and the family in Poulton le Fylde. Although we had similar passions for skiing and ocean sailing, my own sailing in the 1990s to 2005 all in the Caribbean, we did not meet again for many years. Rod and I had always kept in touch, and it has been a privilege to know them both over the years – these are treasured memories. We last met for lunch at ‘The Volunteer’ in Abinger in June 2013 soon after they moved down to Surrey; I was by then living in Arizona and we shared very good times over a couple of beers. Rod will be greatly missed. He was a fine man and a good friend. Thank you for including me in your list of friends able to take part virtually at the funeral earlier today. I felt I was present, special!

My heartfelt condolences go out to Margaret and the family. Philip 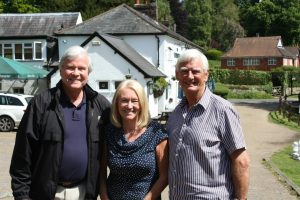