Working with Simon was an education in itself – he was so hugely respected in his field of Roman archaeology. He was more than that, of course, he was a very central part of a close archaeological family. I worked with Simon for nearly 20 years initially illustrating hundreds of amphora for the Amphora Project, still an incredibly popular resource. In 2006, I joined the team for the Portus Project and entered the adventure that was digging with Simon. He was so relaxed, never a cross word, and enjoyed his archaeology so that it was always difficult to get him off site. Of course he had to be fuelled with good coffee and wafer biscuits… 15 years later and I was still working with him because he was both charming and kind. He was even easy to live with on a dig, if you forgave him depriving you of sleep! It was an honour to know him, and work with him. 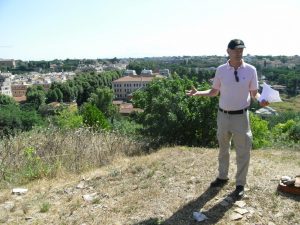