Grandad travelled across the UK to come and watch me play volleyball from Cardiff to England and to Scotland. He was front row with Katherine and I when we went to UKSG to watch Heather and while Katherine and I were tooting the air horns, he was waving the Scottish flag and saying: “do you have to make so much noise… I’m an old man you know” – we know you loved it really Grandad!

Whenever he came and collected us from school the first thing that came out of his mouth when you got in the car was: “did you get all your sums right?” (now if you know me you will know how awful I am at maths so did I get them all right? I would say I got closer to none of them right than all of them right but) what I would respond to him was: “yep every single one” and he said: “good girl”.

I think everyone will remember Grandads singing and music- he had songs for everyone- and his music taste was country if you were lucky or he would just have BBC Radio 4 playing through the speakers. After a good few years of him saying: “what’s that’s noise” or “this is a racket” we got him to compromise and we started listening to some Lewis Capaldi and Ed Sheeran (or as grandad use to say: “can we listen to the Ed bloke”)

Another one of my memories of grandad is him and his sport: Bath rugby and Aston Villa Football. I remember walking down the lane coming back from the lake and I was a good distance away from the house and all I heard was this enormous cheer and shout sounding like grandad, I remember thinking to myself at first what an earth is going on? And running back to the house thinking something bad had happened… As soon as I came in, he shouts: “UP THE VILLAAAA!!!” and me thinking to myself of course I forgot the villa was playing, but also like I just sprinted back for that!! Grandad and myself shared a passion for rugby whenever he phoned me, or I phoned him the first topic would be him asking me if I had played any rugby games recently and if I had he wanted to know everything. I remember him watching the rugby (and football) religiously and if they were on at the same time you would think he would pick one to watch… Nope! He would have his tablet in one hand with the football and the rugby on the TV blasting. He did not want to be disturbed when he was watching his sports unless it was for his 110th cup of coffee that day!

I remember Heather, Katherine and myself sitting in the kitchen just minding our own business and him coming in into the “naughty cupboard” as he called it – a cupboard with crisps and chocolate in it and him grabbing a packet of crisps and walking past us and going “you girls are a bad influence on me” even though he was the one who went and got it himself!!

Whenever I was down and he was sitting in his office and I was sitting in the living room he would go “Orla come here a minute” so I would go through to the office and he would quiz me on where places were based on the photos, he had taken himself throughout his travels, almost like my own geography lesson with him- he was a truly knowledgeable man and had many interesting stories to share!

I remember all the grandkids arguing and going: “I’m the favourite grandchild” “no I am” and grandad turning around and saying: “Heidi is my favourite grandchild!” (Heidi is our- the Hamilton’s- dog you can see a photo of them together below) and us all laughing and saying “okay that makes sense” One of the things Grandad use to do to everyone but I know all seven (eight including Heidi) of his grandchildren will remember is: “I lay my hand upon your head, behold ten thousand bugs are dead” I remember him always doing it to us and we were all too small to reach his head so we always snuck up on him in the office or when he was sitting down on the couch so we could do it to him. Of course with him and his iconic beard!

I also remember the first time I got to feed the birds with him- now I thought I was so special for being able to feed the birds with him but after that first time I realised why I never did it before- let’s just say I got about two percent of the bird food in the actual bird feeder and ninety-eight percent of it ended up on the floor! – Grandad was not impressed especially when he got a visit from some mice!

I remember a couple of months ago I clicked interested on an army event meeting and within seconds he had rang me up and said: “Are you thinking of joining the military?” I said “Yes I am” He responded “I have always fancied the air force myself”(in his posh voice) and we started having a conversation on what I wanted to do within it. I had an idea on doing something active like engineering or infantry but we came to the ‘decision’ of linguistics, pilot, dog handler, chef and a medic – anyways my point in this is that he helped you see the wider picture in everything and different types of opportunities within one thing. He was so supportive over everything I did/ wanted to achieve and was behind me every step of the way.

Grandad, I love you so much and I am so blessed of being able to spend sixteen (nearly seventeen) amazing years of my life with such a loving, caring, amazing man. 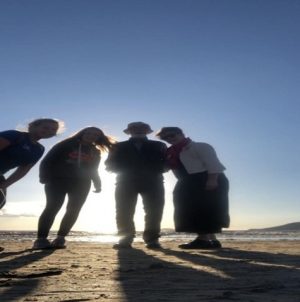