It is with great sadness that I learned of Uncle J’s passing and I am sorry I am not in Hong Kong to share your sorrow.

101 is a wonderful age and Uncle J lived a full life, but still, it is hard to imagine a world without that beautiful smile and the warm welcome he always had for me. I shall miss him. He was someone who defined a cultured and elegant side of Hong Kong that I was unaware of until I met him. The secret and very exclusive club in Mid-Levels that had a fantastic Chinese chef and a priceless ceramic collection, to the somewhat better known Kiangsu and Chekiang Residents Association in Central. The best Shanghainese food in Hong Kong!

Thanks to Uncle Jerry I was accepted as the first Gweilo member back in 1987. Having a believable Chinese name helped but without Uncle J’s sponsorship and support I suspect I would not have been allowed through the door. And then of course there was his love of fine wine and Cuban cigars. He taught me a great deal about both (especially the different brands of cigar and why he prefered certain lengths and widths). I put some of the blame on Uncle Jerry for showing me the way. I still love my Monte Christo’s and fine Bordeaux’s which hark back to the introduction I recieved at the learned and wise hands of the master.

I was thinking back to the first time I met him with Peggy. Peg’s had  started working at Anderson Man with Clive Rigby and I in the mid ’80s and Peggy asked if we might come and talk to her Dad about his public company UniSouth. “Dad’s worried that the shares are very undervalued and wonders if there is something we can do about it.” she said.

So we all went around to his office in Wanchai and that was my first meeting with Jerry H.T. Liu. Little did I know at the time the impact the meeting would have on my own life. My pride and joy today are my two daughters Camille and Lucy who are Jerry’s grand nieces.

Jerry’s desire was to look after shareholders and try to ensure that the shares traded at a reasonable price compared to the underlying assets. Clive and I went away and thought about it. The biggest problem was liquidity. There were very few shares available to buy so the average Hong Kong investor tended to avoid the stock. They almost traded by appointment and as a result the financial community had no interest in writing research on the company.

I remember disussing the issue and we came back with a plan. “What about placing some of the tightly held shares into the market? But instead of the normal placement process where shares are usually placed at disounts to the traded price, what if we wrote an indepth research report highlighting the deep discount to true value and place the shares at a considerable premium?” It would be and was a first for Hong Kong. In fact I do not know of any companies subequently who were able to do it. Jerry also agreed to a medium term program of restructuring the company and liberating value through asset disposals.

The placement went very well. Uncle Jerry also went about restructing the company’s activities, including the sale of the main factory and moving the textile operations overseas. Friends of mine used to joke that the company had the wrong name. It should be called “UniNorth” since the shares kept going up after that. Ultimately the company was taken over and Jerry fulfilled his commitment to look after the UniSouth shareholdiers.

Another wonderul memory I have is a trip we made to Yosemite National Park in the US. Jerry joined my family and my great friend Mike McDonagh’s family for a trip around the Park. The picture above was taken at that time. I can’t believe how young we all looked, although to be fair, Uncle J hardly changed at all over the decades. When I saw him with Vicky and Julian at the Hong Kong Country Club more recently, the only real change was the walking stick. He was still sharp and interested in what Me and the family had been up to.

It is now with his passing, and an opportunity to reflect back that I realise what an important role Uncle J played in my life and he shall be sorely missed.

Much love to you all and my sincerest condolances, 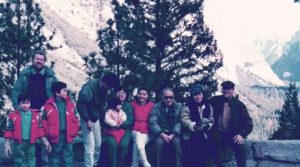