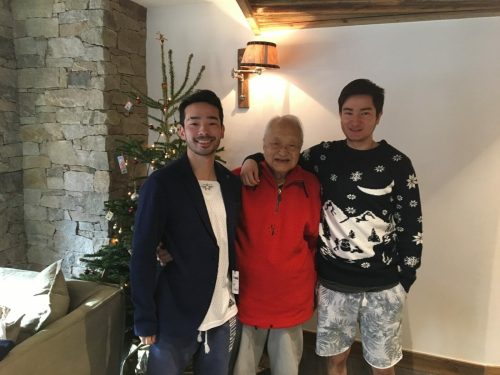 My Na Kung is a true inspiration to me. In his 101 years, he has touched the lives of so many he has met – from the closest of family to the briefest of acquaintances. Always remarkably calm, empathetic and caring, he lived to make those around him happy. He is an example of how to make a positive influence on others and live a life with as little worry as possible.

He influenced my perception of what it means to get older, as he played tennis into his 80s, travelled into his 90s and continued to consume considerable amounts of tobacco and alcohol into his 100s. I do not believe he lived to his 101 years merely through regular exercise or strong genetics, but rather from understanding the key to living is to be removed from stress and apprehension.

“Everything in moderation” – he would say, as he puffs his pipe or drinks another glass of scotch. Because life is not supposed to be about dieting, exercising or doing paperwork. It is not about confrontation, hierarchy or achievement. It is about knowing yourself and enjoying yourself with those you care about, about not holding off that extra drink with a friend you don’t see often, or not travelling far to see family who might still argue amongst themselves. Na Kung simply understood it, that he could take the most enjoyment out of life from removing himself from conflict and relish the moment wherever and with whomever he was. That is how I believe he managed to live so long and so fully, and just his being can provide an inspiration to everyone who knew him.

I take a lot away from my Na Kung, more than I can appreciate now in writing or later on reflection. He is someone who one can only look back on with fondness and not grief, because it is enjoying the memories and what you have which is the lesson he would wish to impart.