I have so many treasured memories of you.  Those times  of long ago that only you and I could know.  I recall the day you were born at home when I was sent outside to wait and then Mrs Guest (the neighbour) came out and shouted ‘it’s a boy!’  On your first day of school you were told to meet me by the school gate at the end of the school day so we could go home on the bus together.  I waited and waited but there was no sign of you.  You had gone home on the bus on your own and I missed the bus and had to walk home!

I remember when you went to Yugoslavia and you bought an Austin 1100 and off you went touring in it with your pals.  You went into a bar and got mistaken for Germans so you pulled out your English cigarettes to prove you weren’t German – the man who had been angry initially with you, having thought you were German, then bought you all a drink!

During our later years – Retirement Days – we travelled a few places together.  On one occasion yourself and Tess joined myself and Dee in Granada Spain.  We visited a beautiful Palace called Alhambra Palace.  You were in your element – a stunning piece of architecture full of history and beauty.  You endlessly clicked away with your camera whilst Dee and I tried but failed (so we thought at the time) to escape our picture being taken.  After a while, nearing the end of the tour, you say “I don’t half seem to have taken several photos.  I best check.”  To your dismay, but our relief, you had been clicking away without a film in the camera!

I will miss the good times and our chats dearest brother.  Thank you so much for being there and supporting us over the years.  I love you.

Best wishes ‘Our Kid’  (as you always used to call me!)

Otherwise known as John and Dee 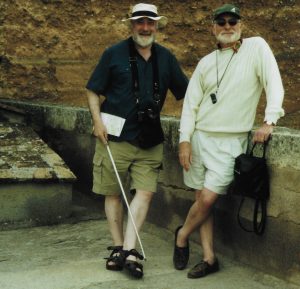