Like with so many of John’s students, my contact with him was truly life changing. I first met the great man in 1968 when I came to Imperial College as a fresh, young, graduate to attend the extraordinary M.Sc. course in Structural Geology & Rock Mechanics that had just been started by John, Neville Price and John Hudson – three giants in their fields.

Many of my fellow students became life-long friends and on completing the course I was lucky enough to be taken on by John as a PhD student. His enthusiasm, encouragement and support during those heady days were inspirational.

During my academic career I invariably sent John copies of papers or books I had written or co-authored and his response was always appreciative and encouraging. He seemed in his busy life to have time for everyone who approached him, and all his students felt a close and personal relationship with him. Times spent with him and Dorothee in Zurich when examining his Ph.D. students or presenting lectures, were always a joy – a mixture of geology, good food, drink and of course music.

The picture I include was taken on a field trip to the Alps which John led in 1971, a half century ago! It shows him with his daughter Rebecca skipping alongside, I think somewhere on Mount Blanche. Happy days. 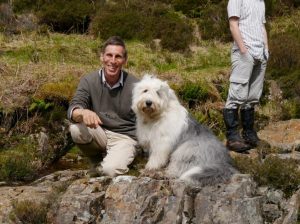