Joy was born on 16 January 1945 in south London. Her parents were William and Kathleen Beckett who were both south Londoners and had met at All Saints, Clapham Park, and married in 1937. Like many families at the time they had postponed having children because of the war. William Beckett was in the RAF and Kathleen let their house in Morden and moved to stay with friends. Joy was born, with the war still in progress – her father was allowed one day’s leave to inspect the baby.

Joy’s parents settled back into Morden after the war, and it was here that she was born and brought up until in 1950 the family moved to Ilfracombe, North Devon. After the war William re-trained as an Anglican clergyman, and served his curacy at St Philip and St James, Ilfracombe. Just before the Becketts departed for this venture Joy was joined by a brother, i.e. me. Joy had probably started school in London – I cannot recall – but in Ilfracombe she was a pupil at Hele Bay Primary School.

In 1953 William was appointed vicar of St David’s, Upper Holloway, in north London. The family left Ilfracombe and moved into the vicarage at 6 Cromwell Avenue, N6.

Joy went to a junior school. Because I am 5 ½ years younger than she was, this was the only occasion, and then for a short time, that she and I were in the same school.

On her birthday (16 January) in 1957 we moved as a family to Nottingham, and to the vicarage at St Stephen, Hyson Green. I have never known why my father upped sticks and moved to Nottingham which is an area with which neither of our parents had any known previous links.

Having passed the 11+ in London, Joy was admitted to Forest Fields Grammar School, Nottingham, where her notable achievements included singing one of the lead roles in Gilbert and Sullivan’s opera Patience.

Joy took her O-Levels in 1961. In those days in Nottingham, results were published in the Nottingham Evening Post. On the day that they were to be announced I was sent to the local newsagent to purchase a copy of the paper. Not surprisingly, on the way back I had a sneaky look for her result, and I burst into the house with a big smile and an excited waving of the paper: she has got 3 O-Levels I announced thinking this was a major achievement (well I was only 11) and was rapidly deflated by the grim frowns all around.

Joy stayed at Forest Fields to take her A-levels, which were not stunning, but she was good at practical subjects which was what persuaded her to train as an occupational therapist. She was accepted at St Loyes College, Exeter.

Joy lived in Hyson Green from 1957 until 1963 and during that time she sang in the choir, went on church hikes and taught in the Sunday School. She also got to put up the hymn numbers for services, and to ring the church bells – which meant turning on the record player! Not surprisingly, I inherited many of these roles when she departed for Exeter. She kept in touch both with her family in Hyson Green and friends she had made through the choir. We did not see much of her because she was working much of the time during her course, and when she was free one summer she went to Ilfracombe and served in a fish and chip shop.

It was clear she liked London life. She stayed well clear of Nottingham, and on one occasion, fed up with my mother complaining that she had not visited the family home for over a year, I wrote her a letter asking her to pay a visit. You understand that this was not because I wanted to see her… but because I was the one she might listen to!

At St Loyes, Joy had to spend one year in hospitals and she chose to go to London, where she had cousins, one of whom, David, taught her to drive. Her Occupational Therapy training took her to St Thomas’s. She graciously allowed me to stay in the flat she shared in Clapham so I could watch the 1965 England v South Africa Test Match at the Oval!

They were married on 9 May 1970 at St Stephen’s, Hyson Green, Nottingham, although at Joy’s insistence her father gave her away rather than took the service. The wedding was a great relief to her mother, who had considered some of her earlier boyfriends to be inappropriate! Perhaps I should draw a veil over this, although there was an interesting tale linked to Joy’s Austin A40, which I recall was damaged when a horse sat on the bonnet!

Following the wedding Mr and Mrs Murray moved to Primrose Court, Clapham, where they were close neighbours and friends of John Major and his wife Norma.

In 1971 they left London for Leicester where Geof had secured a post in a firm run by two Irish brothers, perhaps predictably Murphy Brothers.

On 9 November 1972 their first child, Alison Susan, was born in Leicester and their son Paul followed on 13 August 1974. Geof recalls that with the arrival of the children their life ‘changed considerably’.

In 1977 the Murray family moved to Peacock Close, Ruddington, just south of Nottingham, from where Geof was able to commute to a new post at Morris Cranes, Loughborough. In 1981 he moved to Brush Traction (part of Hawker Siddeley Group), which was nearby and did not involve a house move.

Joy threw herself into village life, regularly taking her post as prompt in the annual village pantomime, in which Alison and Paul were performers. Later, she and Lorna McCulloch, started a community newspaper, The Rudd. She did not return to OT work after the children were born. When our father was widowed in 1983 and moved to a diocesan bungalow in Nottingham she spent a lot of time looking after him until in 1988 he moved to Caistor on Sea.

Geof took early retirement in 1996. For a while they stayed in Ruddington, and it was here that Alison married Guy Roberts in 2001.

Joy and Geof decided that the time was right for them to move, and after trawling the west country they settled on Thrupp, just outside of Stroud where they lived for 18 years, and became much involved in the locality, Joy as Churchwarden at Holy Trinity, Stroud, and Geof as chair of the local branch of the CPRE.

I can say much less about this phase of Joy’s life since we saw much less of her and Geof when they departed for Gloucestershire. When they were still in Ruddington we would visit each other, and Christine, my wife, took the children on several day trips including one to Alton Towers.

Once they had moved to Gloucestershire Joy and I kept in touch mainly by e-mail and we spoke on the telephone only when there was a crisis or a family tragedy. And so what I shall miss more than anything will be the appearance in my inbox of a message from JMuy@aol.com. Many of the messages were no more than a brief comment, on the weather, on Test Match Special, and so on.

The last email I received was written on 4 November and commented on the contents of a short book I had recently published and given her a copy. “It was very good. You write so well, it’s easy to read, not hard work as some historical texts are.” And then she reverted to type: “So you are going to get another degree – will have to buy cards with long envelopes so as to be able to put all the letters after your name!” That was Joy’s humour as expressed digitally. What a shame to think there will be no more JMuy popping up in my inbox. 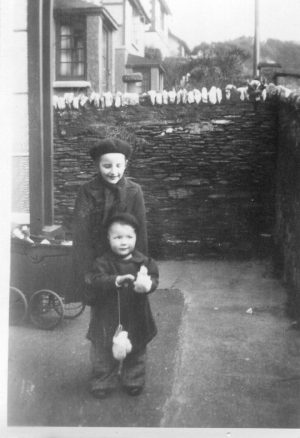