James was a devoted son, brother and uncle to his nephews and niece. He would have done anything for his family and friends and it’s devastating to think he won’t be around any more.

James was my brother in-law and he was an absolute diamond.  He had a heart of gold. I remember one of the first times i met him, going over to Birmingham and how welcome he made me feel. He always made my family very welcome and my sisters loved him too. He comes from a close knit family and is a credit to his parents.

On nights out in Birmingham it was obvious members of the GAA clubs he was involved with in England  held him in very high esteem. Myself and James’ family were always made to feel so welcome by James’ Irish and English friends, who idolised him.

As i got to know him over the years his other love was GAA. He was so passionate and he told me one day coaching was an outlet for him.

One quality I admired about him was he wasn’t afraid to give his opinion or stand up for other people, even if that was unpopular. He had the courage of his convictions and was the type of person we all wish we could be.

James was also a fantastic teacher – the comments on social media from many pupils show how he instilled confidence in young people. Teaching was a purpose and he wasn’t content to just turn up and go through the motions.

James loved his whole family. He would have done anything for his mum and dad, and brother and sister and likewise. He adored his nephews and niece and they loved him too. Many’s a time he would have acknowledged visits from myself and his sister Clare and his brother Anthony and wife Eimear with an “alright folks”, before going to spend the rest of the day playing with his niece and nephews!

My own son Olly idolised his Uncle James, who he would snuggle up to with ice cream (that James supplied!) and watch cartoons together.

On Xmas day night, the night before James passed away, we were leaving James’ house to go home. Olly refused to leave until he had given his Uncle James a hug and a kiss.  When informed James was in the bathroom, Olly said he would wait, and sat on the stairs until James came out.  James came out with a big smile and they embraced. It was beautiful.

James’ memory will live on through his family and friends and the many people he touched.

When I’m teaching my kids about the sort of person they want to be, I’ll show them a picture of Uncle James and tell them of a devoted family man who was kind, caring and loyal.

James McVeigh left the world a far better place than he found it.

I know he is watching over us in heaven, guiding and protecting us

RIP mate, I promise we will never forget you 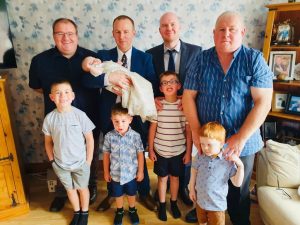