I have to smile every time I think of Ian. We shared so many good times and adventures in the 1980s and he continued to be a really special friend. I loved his spontaneity, his energy, his ‘gung ho’/ ‘why not?’ approach to life – exasperating, yes, but his spirit certainly enriched my life and lives on. In Ian’s words, ‘It was a pleasure and a privilege’ to have known him. Ian was always there to go places and do things with and is still there for me. I will miss him hugely.

So full of stories, ‘Have I told you about the time….’ …Yes Ian, you have but we’ll hear it again

Context (for Resh and others). I met Ian when I was moving from London to a job in Newcastle in 1982. I was going out with Pete James at the time and remember Pete saying, ‘My friend Ian in Newcastle always needs lodgers…’ so I moved into Cavendish Place. Ian introduced me to a lovely group of people in Newcastle and was a great and very forgiving landlord for those few months (it was Alex’s house). ‘Forgiving’ as no sooner had I moved in than he went to the States and I managed to flood the house and bring a ceiling down. That’s my story though rather than Ian’s. He went on to be a great friend and support through those heady days of the 1980’s. I left Newcastle in 1985 for West Yorkshire, we kept in touch and Ian has remained a big part of my life ever since even though I didn’t see so much of him in recent years. I last saw him last summer in Jesmond over a coffee.

Ian did the conveyancing for my house in Heaton. He wanted payment in the form of a ski jacket. That jacket was very well worn and went through many ski adventures and tumbles as Ian tried to master the art of skiing. He never really did. Those trips included mad dashes up to Scotland (winter camping!) in search of snow and a dramatic weekend in Nenthead with Sue and Alastair. I remember a very damp cottage, horizontal winds and blizzards and us trying to recreate the atmosphere of our imagined ‘ski’ holiday with a fondue set! Very messy. Ian had his ‘Russian’ hat, ear lapels standing out at right angles in the wind and getting covered in snow when he fell. But he always bounced back with a smile on his face. I think we went to Andorra for the first ‘real’ ski holiday and had several more after that.

He’d have a go at anything. Sailing – a famous dabble in Pete Bentley’s boat on Keilder when we nearly capsized led on to Ian being a part boat owner with Allan years later; singing – anyone who has known Ian has experienced that; playing various musical instruments – it was a guitar phase when I first knew him.

We followed ‘The Flying Pickets’ performances all over. One memorable evening in the Theatre Royal, we had two boxes and Ian insisted on climbing from one to the other. Sue and Alastair were there, I can’t remember who else (Derek insists he wasn’t!). We would whiz up to Edinburgh for a packed evening of Festival activities and then get back to Newcastle to go to work the next morning. Such youthful energy.

1985 – a vivid memory of a picnic before the Bruce Springsteen concert at St Jame’s Park. Ian in inimitable style, happy, excited full of enthusiasm. Later that year, him laying on a special leaving meal for me with presentations of ‘Newcie Brown’ and a huge poster of Dave from that Springsteen concert. And at Dave and my wedding, Ian and the rest popping out of the polystyrene wedding cake and singing a version of the Blaydon Races for us.

Later, with Resh in his life, happy more settled times and memories – the small ships race near their house in Malton; Syimah and Hassan bringing huge pleasure; Ian the father; Ian and Resh planning and building their house – complete with television appearances. Ian never shunned the limelight.

Thank you, Ian. So many of these things wouldn’t have happened without you. Thank you again for the many many good times and good memories, for making me so welcome in Newcastle, for enriching my life, for your love and friendship. I will miss you. 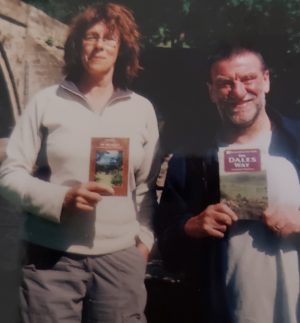