Remembering Ian with contributions from his family

The world was hardly prepared for the arrival of Ian Spafford, in Hull on 2nd January 1949.  He was a larger-than-life character from the very beginning. His family gave him the confidence to be his own person and in return, Ian was fully committed to his family. Ian had a great love of all the family getting together and as an amateur photographer, took every opportunity to record many family events. They said,

Ian was a keen amateur photographer and always took an opportunity to take a photo or a video at every event, this was from his love of travelling (although he would often turn up with carrier bags of photos from wherever was his recent visit) to family events.  He even volunteered to take them at Amanda and Dave’s wedding.

He had a great love of getting all the family together for many social events and always came to the birthday parties for his nieces and nephews and great nieces and nephews.  He would always join in all the party games, whether that involved pie face and getting covered in cream, throwing up an imaginary ball when playing tennis on the Wii or the chocolate game, which despite over 40 years of playing the game could never grasp the rules or be quick enough to eat the chocolate.  He loved to dance (well if you can call it that) to anything from Bruce Springsteen to teletubbies always raising his hand in the air and spinning around and raising a glass or two to celebrate the good times.

He enjoyed family days out and holidays with his nieces and nephews, on one occasion he was hungry and ended up being chased by geese who only wanted to eat his sandwich and on another occasion, we walked up a mountain when we were really little.  He was always there to support in life events and was always encouraging and proud of the things that we had achieved.

One of Ian’s favourite times of the year for family was Christmas, and it would always be the best Christmas dinner he had had that year.  He could often be seen outside with the children spreading reindeer dust or making up Santa’s plate.  It was the only time we realised that Santa preferred Smirnoff ice to milk.

Ian had a great love of playing board games at Christmas, joining in all the quizzes and team games.  One of Chloe, Alex and Ben’s fondest memories of Ian was playing chow crown and trivial pursuits.  They always wanted to be on Ian’s team as it was almost a guaranteed win.   It became a family tradition that Resh and Ian would be wrapping presents on Christmas Eve and the cellotape would always be at hand, although one year they managed to forget a whole bag of presents and had to drive back to Leeds in the early hours to ensure the children weren’t disappointed. The best memories of all were the maybe inappropriate Christmas presents he would buy Resh.  A false arm and leg which got hidden in strange places (in particular in his Mum’s bed which made her scream), the gym and the hiking boots always looking at new ways to get fit.

We remember that Ian re-learnt how to drive at a later stage in his life and had many close shaves and would often get lost on route even with a sat nav telling him the directions, like the time he left a party in Kings Lynn along time before the rest of the family but drove past them on a roundabout in the wrong direction just as we were leaving.

Ian could often be seen to be a little distracted, Amanda particularly remembers a time when they were at the Baltic in Newcastle and Ian jumped off a bus and walked straight by them, completely focussed on the exhibition but they all ended up in the café together.

Ian was a larger-than-life character that lived life to the full and will be remembered fondly for his wise words, guidance and most of all for the importance he placed on family and fun times. 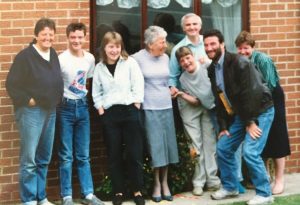