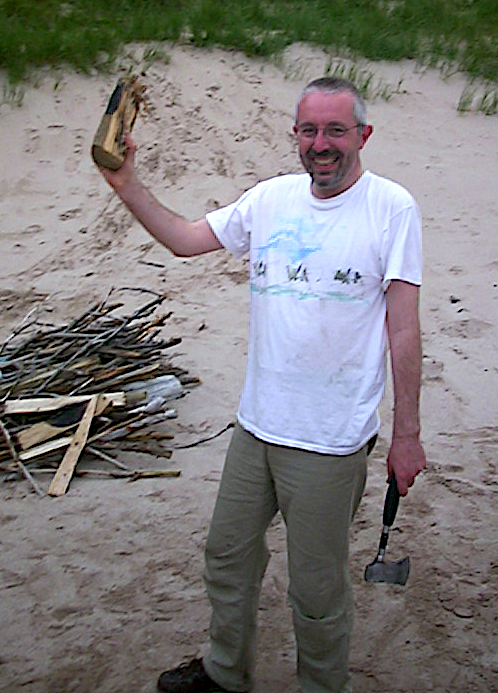 Sara was one of the 1st people I met when I started work in Edinburgh. Jeremy- an old friend of Sara invited us to his birthday as he shared the same birthday as me. Another friend of Jeremy was Barry and Sara met him first and came buzzing up to me excited that this great guy had just given her his credit card to buy a mountain bike with. How could she refuse.

We watched the bond between them blossom and their marriage. They arranged a summer solstice trip to Durness to watch the midnight sun set, and I took the leap and invited my now partner to come with me – so I can blame Barry for that! We kept going each summer for about 10 years until we eventually had a clear night a saw the sun set.

We kept in close contact and after my work at Edinburgh was becoming a bit stale Barry offered me a job at the company he was now a director of. I jumped at that and it was a good choice. My partner became pregnant and when we told Sara & Barry they replied the same and our children were born a month apart.

Barry moved on and after some conversations with Steve set about building some timetabling software. I got regular updates of Barry’s delight in his code and how thing fitted together and simply showed what people wanted. Always with very detailed research. When we met as two families we would usually split to Sara & Jo chatting, the kids playing and Barry & I having a techy conversation, or about wood – his other great passion after his family and work.

He progressed to a working product and when the first customer signed offered me a job again to work with him. We worked closely – he was never really my boss, and things grew to the great team we have now. His drive, enthusiasm for minute detail and passion will be missed, as will his honest bluntness.

I think of him every time I chop wood, and of course will at my birthday and solstice anniversary as he was such a major figure in the path of my life.

Barry – Happiness was friends, wood and an axe!