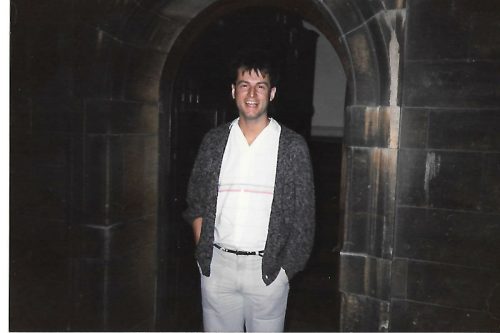 I first met Mark (1983?) when he, Cathy Fuller and Andy Morris joined OHP’s lab in the basement of the old Physiology/Med School building at Liverpool. All three were post-grads starting their PhDs.

The core of the lab was exocrine acinar cell physiology/electrophysiology. I was working with the lacrimal gland. So, when OHP introduced me to Mark and said that we were to work together on the beta-cell, my reaction was what, endocrine? Mark’s reaction was, him?

Thus began what I later described as “beta in the basement”. A separate line from the traditional exocrine studies in the lab.

Mark’s work began with hunting for islets in the rat pancreas while I read the paper before setting up the patch rig. We moved on to maintaining the cells under culture conditions and finally to the insulin-secreting cell lines. At that time patch clamp consisted of List amplifiers, recording on reel-to-reel tape and taking Polaroid photographs of the oscilloscope screen. It was technically demanding stuff which Mark rapidly mastered and we were productive in both presentations and publications.

For any post-grad moving to a new town, a new department and a new project are cumulatively a daunting experience. With Andy, Cathy and other post-grads in the department Mark made up what David Gallacher and I described as the 18-30s club (look up the reference if you have to). Collectively they would take part in Liverpool’s extensive social life. With the exception of Thursday nights. The weekly lab meetings on Friday morning with OHP caused post-grad panic and the night spent either in experiments or running through the tapes to have results to report on the morning. I would also ruin a number of his Friday nights with my “last pipette” rule. The last pipette of the day and often the week would inevitably get the best seal and last the longest.

Mark and presentations to the Phys. Soc. is a subject which I shall put aside. There might be children reading this.

Post-docs as I was at the time have short half-lives and I was approached to apply for a CNRS position in a lab in Paris. This involved spending 3 months in the Paris lab in the spring of 86 to see if it could work. Upon my return to Liverpool I found that in my absence Mark had obtained enough data for him and OHP to publish two papers. I knew then that I could leave. This I did in the autumn.

Mark went on working and publishing and submitted his thesis; He took a post-doc for a while before deciding to leave for Sheffield. With his departure work in OHP’s lab went back to being entirely exocrine. And so, “beta in the basement” came to an end.

As I look at Mark’s career and contributions to the physiology and pathology of the beta-cell not only in the laboratory but with direct clinical applications – in Liverpool, Sheffield and Manchester, I ask if I can take credit for any of this? The answer is a firm and definitive no.

But, I can say that I was there when it began.