Vanar was a platoon Sargent in the VI Cadet Corps.  I had the honour to be promoted as a Lance Corporal and took part with him and other NCOs in a one week gruelling training at the Sungei Besi Army Camp.  The photo is proof we all survived and were fighting fit and worked as a team.

Later he was in London at the Alliance hostel and we had mutual friends all slogging to be accountants. Back home we were all part of the accounting fraternity and he was a roaring lion at the Inter Firm Annual Games.  He had a full life as a respected partner with KPMG. 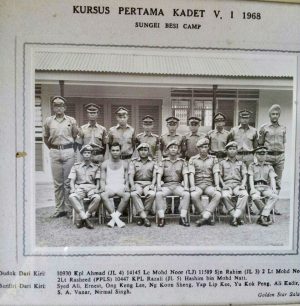