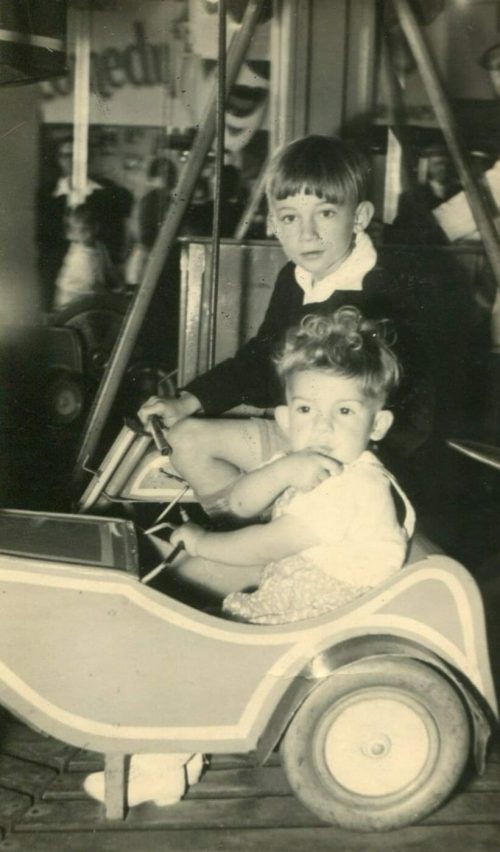 My brother and me

With the seven year difference between Laurence and me, the social interaction was limited and largely non-existent. Not to say that we didn’t get on but we had different interests and the age difference was a severe block to doing anything together.At this time of the Platinum Jubilee the often asked question is “What did you do at the time of the Coronation?” My singular memory of this time is Laurence being on a float during some kind of pageant. He was dressed up as a chimney sweep, all smeared with soot and holding a sweeps brush. He was standing on a flat bed lorry in front of a tiled fireplace (only people of my age can remember tiled fireplaces). I was in the cab.Play time between us was rare. During the Fifties our family home was in Kempston in a cul-de-sac and my usual playmates were neighbour’s children. The only time I can remember Laurence and me playing together, I can picture as plain as day. Laurence was on a tricycle and I had a pile of sticks. I would give one to Laurence and he would cycle off around to the other side of the house and drop the stick, then come back and I would give him another stick and off he would go. This went on till we ran out of sticks then I would stand on the back of the tricycle and get taken round the house to the pile of sticks. And so on. I can only remember us playing this ‘game’ once but it has stuck in my mind.Pass on now till we were much older and living in Luton. Laurence and me avidly watched wrestling on tv on a Saturday afternoon. Afterwards we wrestled in the lounge floor for a while. Due to the age difference and obvious size difference, Laurence would have had an advantage, so perhaps he ‘pulled his punches’. Anyway, we had fun. For a while we shared a double bed and sometimes on a Sunday morning we rolled the bedclothes to the end of the bed and wrestled.Laurence eventually moved to Liverpool to work on a newspaper. Most of the communication between him and my parents at this time was by typed letters. Sometimes he would phone and I couldn’t help noticing his slight Liverpool accent which disappeared when he actually came to visit. I don’t know whether this was a natural bit of acculturation or ‘effecting’ an accent helped him fit in.Bracketing this time, Laurence brought home some girlfriends, not all at the same time. I found it difficult to approach this and was very shy and didn’t know how to speak to them. Some became regular visitors and made me more comfortable and the odd one disappeared quickly. One in particular stayed for a incredibly long time and was really quite likeable. Though what she thought of me initially, well… She once told me that during an early visit I said something and she had no idea what I had said. My Bedfordshire accent was probably a bit stronger then. On the subject of bringing home girlfriends, the only one I brought anywhere near home was critiqued by a relative who was staying with us at the time with the comment, “Geoffrey, you can do better than that.”When Laurence got married to Maeve, I was his best man. Not being couple who wanted a fuss, they got married in Liverpool Registry Office, When the Registrar asked me for the ring, I said that I hadn’t got it. A momentary silence then Laurence got the ring out of his pocket, gave it to me and I immediately gave it to the Registrar and so the wedding went on. I don’t whether Laurence had forgotten to give me the ring on he didn’t trust me with it. DiscussGeography and Laurence having a family of his own meant that visits were infrequent and of course no more playtime. My mother for one couldn’t get her head around the increasing rare visits. Of course, work schedules and having two sets of parents to visit meant Laurence’s spare time was pretty much full up. My mother once asked Laurence did he not want to come home to which Laurence replied that his home was now up north with Maeve. The memories were more interspersed and sometimes we only met during Christmas. Eventually each having families of our own and a redrawing of priorities meant that communication was also infrequent.When Laurence and Maeve moved down South to be close to at least one set of grandchildren it brought them closer geographically and emotionally to me and Toni. The few years that Laurence has spent near to us have been the closest that we have ever been. I think I can say that without fear of contradiction. I relished having the luxury of being just three quarters of an hour away instead of three hours and just making a ad hoc decision to visit. Seeing Laurence sitting in a chair in our lounge with a cup of tea beside him. The cheerful banter, the conversations about nothing in particular. The exchange of memories, who can I ask about family things in the past? I’ll miss that, the simple things.