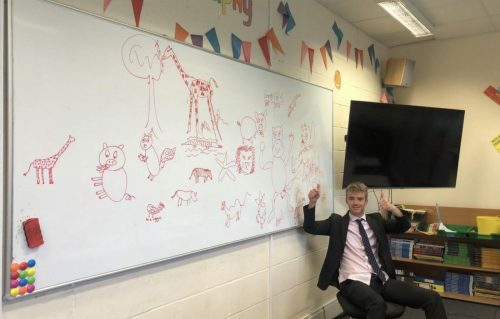 Figgy was just one of those people who always managed to make me laugh especially in situations where we probably shouldn’t be laughing. He managed to get away with things that nobody else could, just because he was Figgy. I will always remember him for his stupid flamingo tie that he never took off or the Christmas socks that he wore all year round even though he always said how much he hated Christmas. The hours of study he spent watching cricket or golf, even though I told him every time that they were the most boring sports to watch. He never did any of his work and yet still managed to get 100% in all of his tests, even when he’d ask me two minutes before what the test is actually on. He made it impossible for Ella and I to get through a geography lesson without laughing when he was constantly making comments behind us, he always did manage to find a way to bring up Brexit even when it had nothing to do with what we were talking about, just to try and start an argument with Eliot. My favourite geography lesson will always be when we spent an hour just competing over who could draw animals better, even though half of them didn’t even look like animals. I remember bringing him pizza and brownies that I had made in food tech while he was in the middle of a hockey match and he ate it even though he then nearly threw up. He attempted to teach Ella and I how to play pool and then very quickly realised we were awful and told us we weren’t allowed to play anymore. I’ve never known someone to watch Mamma Mia more than Figgy, I’ll never be able to watch it without being reminded of him.

Everyone loved you Figgy and we’ll always miss you.