Andrew Lee on behalf of friends from Hull Grammar school

60 years is a long time to know someone, and knowing someone as special as Ian for so long has been a honour for me and for his countless friends and associates over the years.

Hull Grammar School was where four of us met Ian, John, Ian Walsh and myself and it was there that the many facets of Ian’s intelligence and mischievousness began to form. It was here when asked to draw a polygon on the blackboard (yes it was that long ago when there were blackboards) he drew a parrot with an arrow through it. Later in life, this same amazing man chaired complex GMC meetings deciding the fate of doctors and medical practitioners.

It was in France hitch-hiking with his lifelong friend John that he left his passport and wallet in a car, this was typical of Ian, and they were totally at the mercy of the British consulate in Paris and the kindness of strangers to get back home. Clearly they did!

Ian’s zest for adventure was never dimmed, recently even travelling to North Korea- indeed there were few places in the world he hadn’t visited. He had boundless energy- stopping off in Germany with Resh after a gruelling journey from Mumbai, he met Elau and Ian Walsh and insisted they see the sights rather than resting.

He built an accomplished legal career for himself in Newcastle and Leeds but also used his many skills to help and support others.

Meeting Resh and being able to settle down to family life was, without doubt, the most precious thing for Ian. He loved Resh, always protecting her and looking out for her. They were a true unit. He always had her back even though he might sometimes walk in front of her. The times we all spent together – the eight of us – four boys and their wives in Edinburgh and in Barcelona are such special memories – the eight musketeers taking on the Spanish transport system and the perverse Edinburgh festival queuing arrangements.

Memories tattooed into our hearts.

Ian adored and was so proud of his two children – Syimah and Hassan. He would proudly tell us all that they had done and hoped to do. He loved and supported them unconditionally. He delighted in Harrison, his grandson, keeping us all updated with his development and he was so happy when Ellie became part of the family too.

His family fulfilled his life, gave it meaning and this complex, generous, and caring man was content.

All of us who were privileged to know him have an Ian sized emptiness in our lives. We will miss his long stories, we will miss him so very very much.

I’ll finish with a poem that Ian himself wrote when he was 17 years old,

“Shall we go then all together

To where the sun’s rays are themselves illuminated

Shall we sail down the long river in hope”

Ian fully explored his river, his enthusiasm boundless and his life WAS complete. 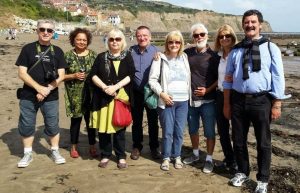