Chris and I would always be the first people in the common room and often he started the morning by locking me out. He’d then win at table football and pool and would never fail to remind me that I had probably lost my hockey match by at least 7-0 at the weekend. He would walk into our morning geography lessons like he had gone through the whole day already when in fact it would only be 10.30, he would be doing up his flamingo tie (never a different one) and sorting out his trouser legs which seemed to be up at his knees!

Chris was one of those people who never did any work yet he would get full marks, I distinctly remember him asking Gabbi and I what case studies we needed to know as we were walking into the year 12 geography exam, he then gets 15/16 on the essay – make it make sense. Another memory I will never forget is when, on my birthday, he stole 6 packets of the mini colins and ate them all (there were five cakes in each). Whenever he played hockey his socks never stayed up and would be halfway down his leg 2 minutes into the game, but he was one of the only guys who understood how mixed hockey worked – it involves passing it to the girls.

He was always so helpful when I had to organise something as a head student, and if no one was able to do a tour he would always do it himself, and even though he was just as busy as the rest of us, he never complained…. usually!

Chris and I have known each other for a long time and I will never forget his dark humour, brutal honestly and insane love for Mamma Mia.

I feel so lucky to have known Chris and I am so sorry that it wasn’t nearly as long as it should have been. 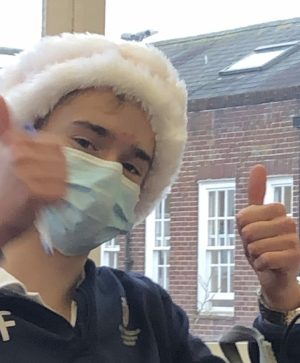