It was with great shock and sadness that I learnt today from Walker Rainey of the passing of Ducky Waddell. Ducky is the cousin of my mother Helen Tannahill and I only met him later in his life whilst he was travelling through South Africa on his way to watch the British Lions, and we discovered our mutual love for rugby. Ducky retuned to South Africa to watch the Ireland tour when he also stayed with my sister Karen-Jane for the Port Elizabeth test, and the last time I saw him was when he invited me to join him and his mates in Cardiff for the Ireland v France game at the RWC in 2015. We would keep in touch via the odd WhatsApp, and a picture of him with Beast Mtawarira (I am originally from Zimbabwe) and Brian Habana at RWC 2019 is still the profile pic of my rugby WhatsApp group. I really admired how he lived his life and got full value from everything he did.

My deepest condolences to his wife Margaret, his brother Allison (who taught me chess and took me sailing on Loch Neigh when I was a kid) and the rest of the Waddell family. You will be sorely missed Ducky. 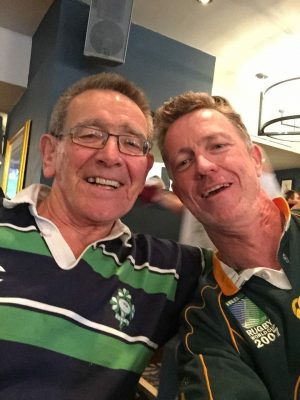