I’ve got so many fond memories of Nga Gong which I will cherish. I remember my first few times meeting Nga Gong at family dinners that Ing would bring me to. I was struck by his vibrancy, pleasant smile and loud voice. He started out calling me Warren which used to make me laugh. His voice would boom “Come on Warren, have a glass of wine” and it would put me at ease as I tried to remember everyone’s name. Eventually Warren transitioned to Darien which over time finally settled on Darren. I didn’t have the heart to correct him because he was such a nice, sweet man and I didn’t want to offend him. He could have called me anything and it wouldn’t have mattered.

I had a couple opportunities to take Nga Gong out for dinner when Vicky and Julian were out of town or busy. The car wouldn’t be in park for more than a few seconds and he would already be getting out. I would try and rush over to his side to assist and he would swat me away and say “I’m ok, I’m alright, I don’t need any help”. I would watch in awe as he would practically float up staircases and escalators barely using his cane for assistance. At dinner I would ask him questions about his life. I remember him telling me that air travel was the most impressive thing to him. “It was much faster than taking the boat!” he said. I just sat there amazed thinking about how much this man has seen and experienced and how much the world has changed in his lifetime. It was a gift to be able to sit here and ask him these questions and listen to his stories over a beer. It was a special dinner and a memory that I will remember forever.

I will miss his big presence, smile and gentle handshake when I would see him. His memory will no doubt live on in the ripple effect that his life created. I’m honored to be a small part of the family and an extension of that ripple effect. Nga Gong’s great health and longevity was a huge blessing for us all and he will be missed. Rest in peace Nga Gong. 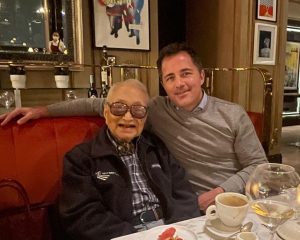