it’s the rarest of experiences to meet someone like Steve; funny, kind, compassionate, eccentric, all things to all people. I first met Steve a number of years ago when I joined the business network group, BNI. I’d only been to 2 meetings when I had a bit of a domestic disaster. I’d gone to the en-suite above our daughters bedroom at 6.00 am in preparation for our Thursday morning meeting at said BNI. Suddenly, our daughter is screaming out that there is stuff coming through the ceiling & it turns out that the macerator has gone into terminal decline & started to discharge through a dodgy connection! I swiftly put a message on the WhatsApp group to say I would be delayed & there ASAP. Steve, the man for all reasons, sent a message back stating he would have someone there for me urgently. By the time I’d got to & finished the meeting Steve had got the repair sorted. I thanked him at the time & he sent me a message later saying,”no problem pal, this one’s on me”. Even though clearly it had been on our daughter! He literally got me out of the s**t & didn’t charge a penny. Every time I met Steve, over the years, he made me & many others smile & laugh. He was a generous spirit to a fault. Such a tragedy that he is gone. He is loved & missed by everyone who met & knew him. It was a privilege to be at his funeral & to say my goodbyes. I have never been to a funeral like it, the best part of a 1000 people processing through Urmston to the church & the most incredible service. What a farewell the family & friends did you proud. See you on the other side, pal. 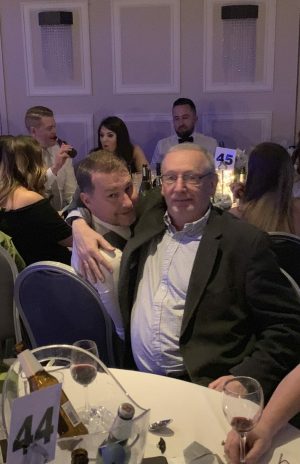