Paul and I met in November 2021 in the Elite Dangerous computer game forum. Paul had been diagnosed with terminal bone cancer shortly before and wished for someone to team up with and show him the aspects of the game he had missed out before, as he had mainly concentrated on exploring up to then. For some reason, one morning, I suddenly knew this was for me and so I said yes. It was one of the best decisions I made. Since then, we flew together in that 400 billion star systems galaxy whenever we could, sharing our lives by playing the game and the adventures we made and also on Discord where we stayed in contact daily through all our ups and downs, his and mine. It soon turned out we were quite a good match, as we both loved computers and the Elite game since its first iteration in 1984, worked in the IT business (ok, he was a C# pro and I had only chosen Java) and shared a lot of other interests too. We somehow simply understood each other regardless of growing up in different countries and different cultural backgrounds.

I had a fleet carrier, so he moved his ships over to that and the journey started. Since then, we’ve played endless hours together, starting with teaching him Space Combat, and we did numerous battles together as a team, defending starports and installations, zipping through asteroid fields in dim morning sunlight with guns blazing, up to winning wars and ultimately entire systems for our squadron, the Teaka Altruists Bagging Cooperative. It cannot be summed up in due brevity I fear, but we took extensive tours to very far out and mysterious places, following an ancient and epic story, discovering every secret I knew about, up to fighting humanity’s worst enemy, the Thargoids, and we finally succeeded. He won a prize for his photography during this.

Sharing our time, sharing our lives, forming a bond that makes Paul one of my closest friends to date, and that is not lightly said. I was with him in my thoughts, prayers and Discord every day and many nights, through the various hardships he faced, suffering with him when he suffered, rejoicing with him when he rejoiced, finding hope again and again, sharing life, and I think that’s what friendship is all about. Paul is an example to me in so many ways and the bravest man I have met so far. He never complained, ever, through all the pain, bad news and new troubles which were a-plenty. And he never put himself first, but always cared for others still. I am deeply humbled by his attitude.

In the game, our last journey led us to a place named Ishum’s Reach which is the absolutely northernmost place in the galaxy. You can’t go any further. The horizon is all black, very few stars and all of them tiny and distant. On planet 9, we drove to a hill in our SRVs, then climbed it on foot. At the peak, we stood side by side for as long as we could, musing about a single bright star on an all-black horizon. I don’t know what it meant for Paul, but to me, it means there is a light in even the darkest hours. It was a special moment indeed. We didn’t know then, but it would be the last time we flew together. It’s a precious memory for me.

I’ve lost a very dear friend. I miss him badly. But it was worth this pain every single minute. No more words necessary. 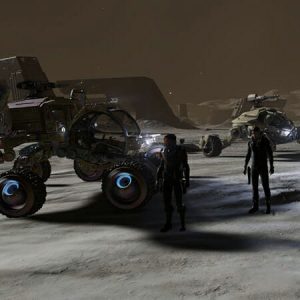 Christian B. (The Lawful)