I remember Will as a motivated, intelligent and hardworking scientist who was full of life and to whom the north of England was important. I supervised him for one of his MRes projects at Imperial College: he was keen and capable and was proactive in searching out material relevant to his project. Will’s written work was excellent and I remember being very impressed by the first draft of his project report which was written authoritatively and which collated and reviewed relevant literature for an area of biology very much influenced by quantum chemistry (something not touched upon in undergraduate biological syllabuses).

Will particularly sticks in my mind as someone who needed to discover things for himself – it was never enough for me to simply tell him something, or to tell him what to do next, he needed to do the experiment to show that it was a good idea. Having done this, he would make sound choices, and move forwards productively. While amusing (and occasionally mildly irritating), this is what made him a good scientist – it’s not enough to believe what someone has told you, you need to base your decisions and knowledge on solid foundations, and Will did this naturally.

I found Will easy to supervise because he gave me instant feedback on when I needed to step back and let him do things his way. I know that more recent students in my lab have benefitted from what he taught me about supervision. My heart goes out to Will’s parents, family and friends, and to the wider Biology community at York.

(The picture is one that Will sent me from a poster fair when he was interviewing for a PhD in Dresden – he was offered a studentship, but turned it down because it didn’t feel right for him.) 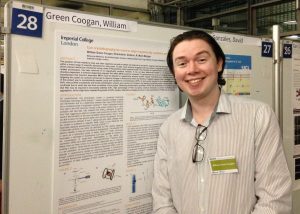