I was relatively new to KPMG when I was tasked to interview Mr Vanar for the internal newsletter (eTempo) in preparation for his retirement. I knew not much of the man, but had heard many speak his name in hushed reverance. I recall his impatience during the interview, as he had not thought his retirement required any fanfare but, greenhorn writer that I was, I was determined to walk out of his office with a “scoop”. And boy did I get it.

After relaxing a bit, he became a fount of information that day, relaying one fun-fact and experience after another as I scribbled furiously and the meeting appointment went over time. I found my old interview notes and subsequent article written about Mr Vanar in eTempo, which included these points…

The hidden side of Vanar:• His absolute favorite band is The Shadows• Dislikes songs by Frank Sinatra• Vanar would have been a Valentine baby…if he had waited one more day • Vanar contributed significantly to the profit of the curry puff seller who came in to Wisma KPMG every Tuesday and Friday

My interview transcript included this concluding comment he made about his KPMG journey: “Time has certainly flown which I suppose is a good thing because as they say, time flies when you’re having fun. I have certainly enjoyed myself, especially from the allegiance of the partners, and also the good work of the staff…but don’t tell them I said that!”

A man of succint but meaningful words. Rest in peace, Mr Vanar. 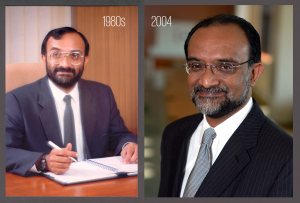