Rosalie hated being photographed and would tense up. In this is picture, taken in a recording studio, she has been caught unaware. 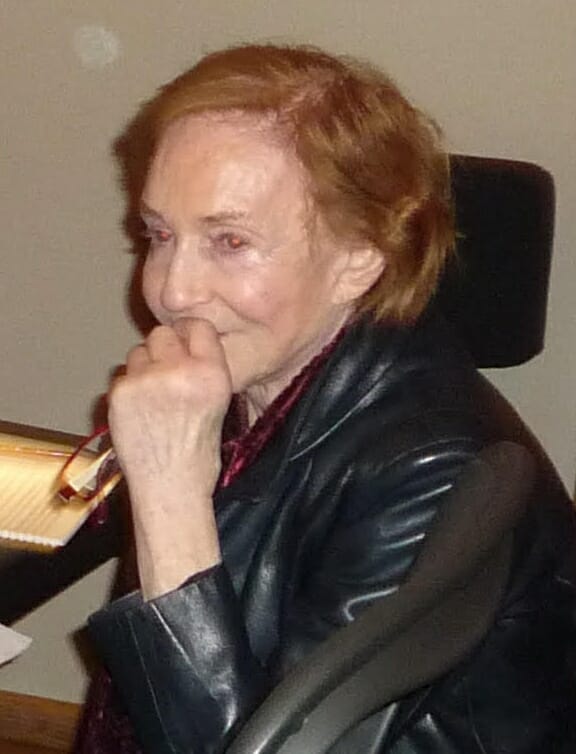 The following  autobiographical text comes from SoundCloud where you can listen to some of her compositions.

Born in London in 1932. Rosalie Coopman began composing as a child and during those precocious years she played her piano compositions on the BBC.  Full of zest, as a young woman her many interests lead her to study art, history and languages in Florence, Italy.

Her married life led her to take some years away from her pursuits, whilst developing a life-long interest in poetry, eventually returning to teaching and composing.

In that period Rosalie Coopman composed for film, documentaries and concerts. A substantial part of her concert work was focused on the piano, duets and trios, these often revealing a dance – like quality.

Over the last decade she abandoned her early style and concentrated on small chamber sets where she started to develop a more succinct style characterised by a clear, no frills sound creating aural landscapes which very often are interjected by playful rhythms and colours. Though there is a brief return to her early vocabulary in the piano work ‘C’Tout’ (2007) and the trio ‘If you should see him’ (2009).  She carried on moving into a world where though tonality (if at all) is blurred via a sparse, concise vocabulary and imagery, a lyrical element always permeates the work.

In 2019 Her work ‘A Winter Collage’ for String Quartet and piano was awarded the 1st prize in the Brixworth Music Festival Competition.  Her work ‘Resound’ received a special mention for the Ensemble Impronta Composition Competition 2019 (Germany). Three weeks before her death she was she was awarded First Prize in the International NMF Composition Competition for Bb Clarinet Miniature Pieces in memory of Morton Feldman with her piece: Lizard – which you can hear on SoundCloud (https://soundcloud.com/rosalie-coopman).