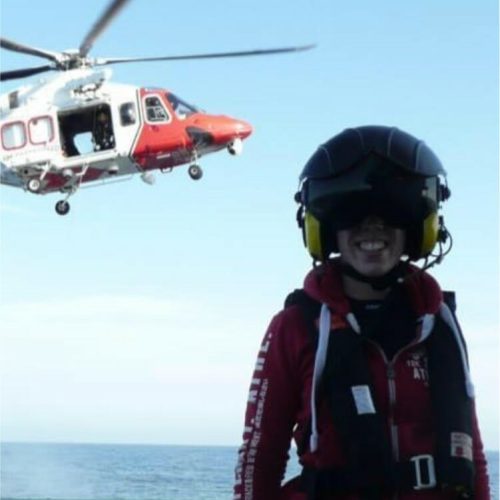 Zoe joined the CAA on 19 July 2021 as RPAS Technical inspector within the RPAS Sector team. Before joining the CAA, she worked as a Flight Safety Officer with The British Airline Pilots Association.

She was a keen air cadet, and her dream was to join the RAF to fly fast jets. Later, she decided to become an airline pilot instead. She qualified for a scholarship while working for a helicopter company based at Fairoak’s in surrey. Her role was to clean and refuel many types of helicopters. While doing her day-to-day job, she applied for a scholarship to fund her to qualify for PPL(h). She was chosen for this and received her helicopter licence at the age of 17. She was one of the youngest helicopter pilots in the UK.

As an alternative to flying, she pursued a career in air traffic control. She trained and worked as a Flight Information Services Officer (FISO) at Fairoak’s airport in Surrey for several years. Later, she also completed her basic ATCO training with NATS. She has also spent some time working with Bombardier Skyjet as an operations controller helping to manage a fleet of aircraft.

She was passionate about safety and educating the aviation sector, especially new entrants such as RPAS. This passion led her to join RPAS Sector Team at the CAA. She always displayed the highest level of professional integrity and CAA values in her role.

Alongside her aviation work, she also ran her own personal training company specialising in triathlon and open water swimming coaching. At one point, she lived and breathed a triathlon. She enjoyed sports, mainly running, cycling, and horse riding.

Zoe was married to Michael Reeves and mother of two girls (five and seven years old) and an Irish terrier. She had a very positive outlook on life and will be greatly missed.

Book Owner: Her colleagues at the CAA

Zoe was incredible.  She was one of those rare people who had genuinely done so much, and was still so driven, keen to learn and help.  From the first conversation it was clear she would be a great person to join the CAA, and that was borne out easily by how well she fitted …
Read More

Zoe, I will miss our conversations. You were wonderful to work with and oh so patient with me, always willing to share your skills and knowledge. You had a wonderful sense of humor and I treasure the time we got to spend working together.  Rest in Peace my friend. x …
Read More

Zoe was the first winner of my late partner’s training scholarship, set up in memory of his son, Dennis Kenyon Junior. She was a bright, aspirational lady, full of determination to succeed in all that she did. Dennis was so proud of her achievements and often said that Zoe had a natural talent for …
Read More

Zoe – I did not know you but hearing of your passing and reading a little about you as a truly inspirational person has lead me to pass on my sincere and heartfelt condolences to your family.  I’m sure your light will always shine bright – Kirsty R …
Read More

Zoe had a genuine enthusiasm and energy for all things aviation related. Her contribution to the RPAS sector team was yet another addition to her already long list of aviation related achievements. Zoe was a positive thinker and was universally liked by all who met her. Her quiet and resolute day-to-day courage dealing with …
Read More

In her time at the CAA as an RPAS Technical Inspector Zoe made a real impact to the RPAS Sector team and was someone always keen to learn and ask questions. I didn’t have the chance to get to know Zoe very well but could see how much the sector team respected her and …
Read More

My deepest condolences to Zoe’s family: she was an amazingly clever lady very much in love with life, with her girls and her beloved husband. May her love for life be passed to her fantastic girls and may her girls feel their mother’s love forever in their heart..because that is where she is resting …
Read More

I was deeply shocked and saddened to hear of Zoes passing. I had met Zoe a couple of times through the CAA and each time her positive and happy personality shone through. She had a great desire to live life to the full  and was driven to achieve her ambitions. She will be sorely …
Read More

In the short time Zo was in our team she bacame a reliable collegue and good friend. Always supportive, positive and striving to learn. Zo always brought her inquisitve and hilarious mind to any team or individual interaction and that will be hugely missed!  My thoughts and condolences go out to her husband, young girls, …
Read More

Oh Zoe – such a talented, truly engaging, knowledgable and skilled lady. A true super-woman athlete and a petrol-head for sure ! My goodness she will be sorely missed. I send all condolences to her loving family.  RIP. …
Read More