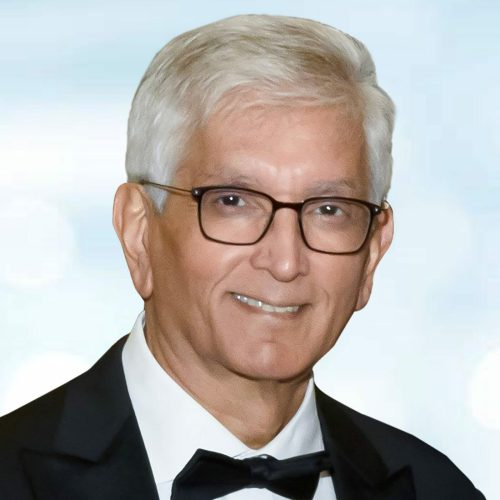 He was born on 6th April 1952 in Morogoro, Tanzania, to parents Jivraj Lavji Rabheru and Raliat Jivraj Rabheru. He was the second youngest child out of 10 siblings, 7 brothers and 3 sisters. They belonged to the prominent Lohana community.

His father, originally from Verawal in Gujarat, India, was a respected businessman and entrepreneur in the community. He always worked hard, cared for his family and strived for a better life – all traits that were very much inherited by Sir Ashok.

Sir Ashok was sent on his own to England in 1967, aged only 15 in the hope of having better opportunities, education and fleeing the dangers caused by political unrest in Tanzania. He had no money, didn’t speak English well and didn’t know anyone except his brother, C J Rabheru. Despite these inevitable obstacles, he graduated school in Richmond upon Thames, followed by Kingston College, where he met the love of his life, Harshida. They married in the summer of 1980 in Kenya.

Ashok Rabheru started his career in the IT industry and went on to found the Genisys Group, an IT software solutions and procurement company, in 1985. Since its modest beginnings, as a small five-person company in Woking, it has grown considerably and now has offices in 3 continents and employs over 1,000 staff.

As a prominent business leader, Ashok Rabheru accompanied Tony Blair on two business delegations: one to Bangalore in 2002 and, in 2005, to Beijing and New Delhi, at the EU-China and the EU-India Summits.

Despite the demands of running a successful IT business, Ashok still found time to support various charities.

Sir Ashok was a Trustee of the Duke of Edinburgh’s Award between 2000- 2010 and was a prominent member of the steering group for planning and raising funds for the 50th anniversary of the Award in 2006.  Since 2010, he held the position of Chairman of the DoE UK and International Joint Funding Board. More recently he also worked tirelessly to assist in marking the centenary of His Royal Highness Prince Philip, The Duke of Edinburgh and particularly to celebrate everything the Founder did to champion the infinite potential of young people. Sir Ashok was assisting HRH Prince Edward, The Earl of Wessex with the launch of a three-year campaign, The Founder’s 100 Legacy Fund to raise awareness of the importance of non-formal education and learning for young people across the world, right up until his last days.

Sir Ashok was an active supporter of several charities, including Combat Stress, Debra and medical research institutions such as University College London and Imperial College together with ongoing work within the Asian community. He also took pride in supporting smaller local charities such as Heart of Bucks, Pace Centre, Wheel Power and Wexham Park neonatal unit, who cared for his family when his triplets were born prematurely. He never forgot his heritage by funding regular eye camps in Gujarat.

In recognition of his extensive charity work, in particular, his role as a Trustee of the Duke of Edinburgh’s Award he was awarded a CVO (Commander of the Victorian Order) in the 2011 New Year’s Honours List.

Ashok was also honoured with the crown appointment of Deputy Lord Lieutenant of the County of Buckinghamshire, as someone who had served the local community and had a history of public service in other fields.

As an alumnus of UCL, Sir Ashok was a dedicated advocate and supporter of UCL ever since his graduation in 1974.  As an entrepreneur, business leader, supporter of opportunities for young people and committed global citizen, he shared UCL’s ethos of making a difference both locally and internationally.  He was especially proactive in supporting UCL’s It’s All Academic Campaign in its focus on engaging and building UCL’s global community and was awarded an Honorary Fellowship from UCL in 2022.

Most significantly, in 2022, Ashok J Rabheru, was awarded the rare honour of a Knighthood in Her Majesty Queen Elizabeth II’s Platinum Jubilee Birthday Honours List. He became Knight Commander of the Royal Victorian Order in recognition of his work for The Duke of Edinburgh’s Award, which he had supported in various capacities for over twenty-five years. Having his wife and triplets with him at his investiture ceremony at Windsor Castle in October 2022 was one of the proudest moments of his life.

Sir Ashok’s story is one of defying the odds and overcoming adversity. He always worked hard and never gave up. Even when he became a successful businessman, he always had his faith and commitment to helping those less fortunate than himself. He was generous with his time, wealth and knowledge; always encouraging people to do their best. He would go to great lengths to help a friend in need.

In the rare times when he was not working, spending time with his family or helping others, he was an enthusiastic cricket and football supporter and enjoyed playing golf.

Sir Ashok Rabheru, leaves behind his beloved wife of over 40 years, Harshida and his adult triplets, Nikita, Rishi and Shayan, of whom he was immensely proud of and loved dearly.

He will be deeply missed by all who knew him. Rest in peace Sir Ashok.

A memorial service to celebrate the life and legacy of Sir Ashok’s will be held in the Spring, details will be circulated nearer the time.

Such a huge loss. We met on many occassions and he would always be kind and thoughtful in how he could raise the impact of his work with DoE Awards. An inspirational man who made everything look effortless. He was understated and humble and I found him a role model to emulate. So sorry …
Read More

Dear Sheila, Nikita, Rishi and Shayan This is a tough time, indeed, for you all. He was brave facing his illness and wanted so much to protect you from its consequences. But this is not, of course, possible – he did not understand the depth of your inter-dependance as a close family unit. Ashok …
Read More

My deepest condolences to Harshida, Nikita, Rishi, and Shayan. I am deeply grateful to have had the privilege of working with Sir Ashok more recently at The Award. His calming, soft-spoken manner underpinned an uncanny ability to motivate others to achieve immense impact. He will be dearly missed. …
Read More

It is truly with a heavy heart that I write this message. I was introduced to Ashok by my brother Kris who had nothing but wonderful things to say about him. My memories of the few times we met are that of great laughter and silliness. He was very witty and generous and I …
Read More

I was saddened to hear of Sir Ashok’s passing, and on behalf of the children, families and staff at the Pace Centre, I send our sincere condolences to Harshida, Nikita, Rishi and Shayan. Sir Ashok was a generous supporter of our work, more than willing to leverage his extensive network to help provide IT …
Read More

I was so very sad to learn of Ashok’s death.  My deepest condolences to Lady Ashok and to Nikita, Rishi and Shayan.  I was priviliged to have worked with Ashok at the request of the Lord Lieutenant of Buckinghamshire, Countess Howe.  Ashok and I and other deputy Lieutenants were tasked to promote the planting …
Read More

I send condolences to Sir Ashok’s family on his passing after so long in poor health. I did not know him well but lunched with him on occasion, mainly discussing philanthropy, and am old enough to remember his funding of Genisys. In sympathy Dame Stephanie Shirley CH …
Read More

I was saddened and shocked to hear of Ashok’s death. My love, prayers and condolences go out to Sheila, Nikita, Rishi and Shayan, I know you will miss Ashok enormously and he leaves a massive hole in your lives. I was introduced to Ashok by my darling late husband Albert, who loved and respected …
Read More

My Heartfelt and sincere condolences on the passing of Sir Ashok.  He was a great inspiration and supporter of DoE, including the international award. He will be missed by many I am sure, but his legacy lives on.      …
Read More

Stonehage Fleming extends our deepest condolences to Lady Harshida, Nikita, Rishi, Shayan and the family. Sir Ashok was a wonderfully kind and insightful man, who will be greatly missed.  We met Sir Ashok more recently as part of developing a partnership to extend further the impact of the Duke of Edinburgh’s International Award in …
Read More