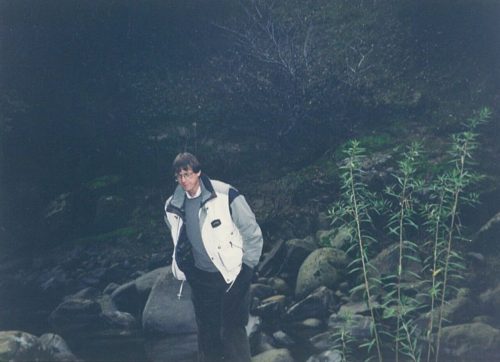 It is with deep sorrow that we have to report the death of our dear friend and colleague Paul McMillan.

Paul was an outstanding scientist, colleague, and teacher who joined UCL and the Royal Institution as Professor of Solid State Sciences in 2000 and has held the Sir William Ramsay Chair of Chemistry since 2008.

Scottish by birth, he was an undergraduate at the University of Edinburgh where he supplemented his studies by playing in a band; he retained a love of music throughout his life. He did his PhD at Arizona State University. His brilliance was such that he was hired onto the academic staff shortly after gaining his degree.

His primary interest was in the study of matter under extremes of temperature and pressure for which purpose he used diamond anvil cells and multianvil presses. His work was extraordinarily broad taking in fundamentals of geochemistry, the study of pressure-induced amorphisation and the quest for liquid-liquid phase transitions, Raman and optical studies of materials under high pressure and, in recent years, electrochemistry, energy conversion materials, the study of proteins, bacteria and small invertebrates at high pressure.

Paul was involved in a huge range of collaborations which took in computational chemists, chemical engineers, battery scientists, physicists of the nanoscale, cell biologists and veterinarians. Over his career he contributed to almost 500 research articles including some which are landmarks.

He was an enthusiastic teacher and mentor who thought deeply about how to convey complex ideas to students. He also had strong views about what and how we should teach chemistry and science more widely.

Paul loved football, playing for an hour one evening a week with colleagues until just before the pandemic struck.

Paul had a great love of France having spent time as a visiting professor in Nantes and Rennes, and enjoying summers walking in the mountains around his beloved Grächen with his wife Mary-Claude.

I first found out about Paul’s Passing upon a request I had made for a reference. It is very saddening to think we had lost such a great contributor to Science and the Scientific community at UCL so abruptly. I as Paul’s PhD student shared some common interests, having studied at Edinburgh University, being …
Read More

It was with deep sadness that I learned of Paul’s passing. I had been aware for some time of his battle against cancer and his chemotherapy treatment. What was so remarkable was that Paul was continuing to engage in research projects and undertake teaching commitments, despite his poor state of health. On November 18th last, …
Read More

It is with great sadness I learned today of Paul’s passing. I first met Paul, or “Mac” as I knew him in October 1973 when we started our undergraduate degree at the University of Edinburgh. We became good friends during our student days, playing music together, hillwalking, frequenting Edinburgh’s many bars and trying to …
Read More

I have been personally inspired by the dedication that Paul had to his profession, the science he did and the teaching he undertook, and I greatly enjoyed his company in scientific, sporting and social settings over many years. I will miss him greatly.  …
Read More

Prof. Paul McMillan was fiercely passionate about science. He was a unique character who held the highest standards. He was tough on himself, and tough on others; a trait that often produced inspiring work. He published exceptional manuscripts in excellent journals and so his scientific legacy will live on. He was dedicated to teaching, …
Read More

Paul had a big impact on my life, it is hard to imagine how I would be where I am today without him. His honest scientific and professional advice was of great value to me and I will miss him very much. …
Read More

It is very upseting to hear of Paul’s passing.  Paul was always really good and generous to me.   I enjoyed playing 5-a-side with him and was so glad that he kept this up.  Football was mostly at ULU sports hall and this venue could barely accomodate 3-a-side so the games were pretty wild.  Paul …
Read More

Paul was inspirational, both as a scientist and as a person. I’ll remember him for the kind and generous support he has shown me ever since I arrived at UCL, for his huge enthusiasm for research and teaching, and for always caring about his co-workers and colleagues. Paul, I will miss you.  …
Read More

I am deeply saddened by Paul’s passing. I first met Paul back in 1999 during an Internship at ASU. He offered to take me on as a graduate student. I was with him as we packed the lab to move it to London; I was with him when we designed and built the lab …
Read More

I am deeply saddened to hear that Paul has passed away.  His scientific brilliance was only matched by his intense passion for science.  He worked in a wide range of areas and had in depth knowledge of them all.  He was a patient and creative teacher, always willing to help people who wanted to …
Read More