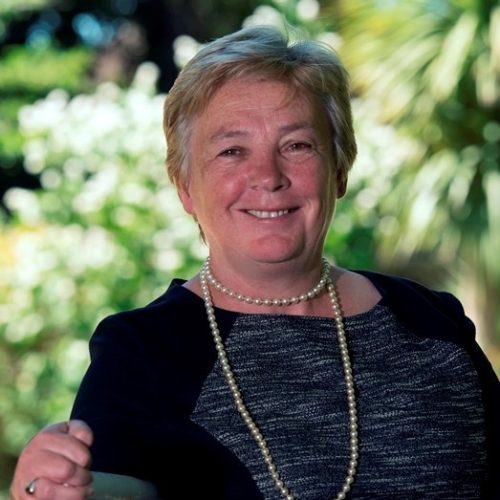 Mary Ireland was Head at Bancroft’s School, Woodford Green from 2008 until her retirement in 2016. Previously she had run a boarding house at Ardingly and was Deputy Head at Christ’s Hospital.

She served Bancroft’s with great distinction and will be fondly remembered by parents, staff and pupils. As one former colleague commented, “Much loved by Bancroft’s pupils, admired by the parents and appreciated by her staff.”

One of Mary’s lasting achievements at Bancroft’s was the establishment of the Bancroft’s Foundation to mark the 275th anniversary of the School. She was passionate about expanding the reach of a Bancroft’s education to include those for whom it would have been impossible without financial support.

Upon her retirement, Mary was invited to join the Drapers’ Company as an Honorary Freeman, becoming a Liveryman in 2019. Last year she was elected to the Court of the Drapers’ Company, serving as Junior Warden.  She was a governor of several independent schools, including Eastbourne College, and the Chair of Drapers’ Maylands Primary School. Mary was also a trustee of the Sue Thompson Foundation, a charity which supports children in need.

The thoughts of the Bancroft’s community are with Simon, Fergus and the rest of Mary’s family at this difficult time. Mary will be much missed.

My first meeting with Mary was when I was in the Bursary signing documents before commencing my role at the prep school. A lady walked in and I stood up quickly asking if I had taken her seat. She chuckled and told me to remain where I was. Embarrassingly, it was a few days …
Read More

I learnt a huge amount from Mary about education. Straight talking, we were very similar in that particular trait! I loved her assemblies – the one on Crane Flies was typical – she loved learning and instilled that in her pupils and staff. As a young aspiring leader myself, Mary was full of encouragement …
Read More

Mary’s passing has been a huge shock to everyone in the Bancroft’s community who ever crossed paths with her during her tenure. A huge sports fan and supporter, Mary would often find herself on the touch line or boundaries of our sports fields and was always a positive influence and presence but one of …
Read More

As a Head Teacher, Mary was supportive, empowering, empathetic and straight talking. For eight years, she lived and breathed Bancroft’s and her love for it was evident, from the pride in her voice to the way in which she fully immersed herself in every aspect of the school. Whether it was a concert in …
Read More

My greatest memory of Mary was on the sideline supporting Bancroft’s Netball teams. Her presence at all sports events was greatly appreciated by pupils, parents and staff and reflected the passion she showed in getting the best out of the Bancroft’s community. As a parent and teacher, I was grateful for her encouragement and …
Read More

Mary Ireland was everything you wanted and hoped for in a Headteacher – caring, steadfast and deeply committed to the school. As a parent, you always felt that she had a clear vision for the school, which put the pupils’ development and well being at the heart of the whatever she did.  As a …
Read More

Though I only knew Mrs Ireland briefly, what a wonderful impact she had! Her door was always open, and it seemed like she knew all of the pupils and parents by name almost as soon as she arrived. I would like to thank her for the opportunities I was given to make memories in …
Read More

I met Mary through the Bancrofts foundation . She was a warm and inviting character and her enthusiasm for the School and its pupils was totally infectious. I was very sad to hear of her passing as she still had so much to contribute to worthwhile causes. My deepest condolences to her family at …
Read More

I was very sad to hear of the passing of Mrs Ireland.    One of my most vivid memories of Mrs Ireland was when I bumped into her one sunny afternoon – two weeks prior I had mentioned something to her in passing about a project. She then asked me how it was going, …
Read More

So sorry to hear the sad news. Mrs Ireland was always so kind and fair to my daughter when she was at Bancroft”s school. She was very down to earth and approachable and she seemed to know all her students so well.  Sendong sympathies to all her family  …
Read More