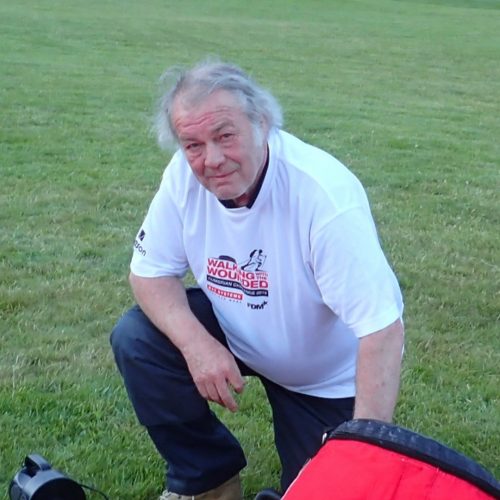 Kevin joined our team at Walking With The Wounded in 2015 taking the role of Office Administrator and immediately became a much admired and respected member of our staff. Alongside his love for music and talent for playing the organ, he swiftly became passionate with his interest in working to support those who served.

Many of you will have met him and enjoyed his company at various WWTW events, most notably the Cumbrian Challenge where he was instrumental in ensuring the event was a huge success and enjoyed by everyone in attendance. No job was too small for Kevin to help with and always done with a smile. We consider it to be a very fortunate day the day Kevin joined the charity.

Kevin was committed to helping others and he often worked tirelessly late into the night, for he always wanted to be certain no detail or person had been forgotten.

He will be very much remembered by all of the team at Walking With The Wounded and to say he will be missed is an understatement.

Book Owner: Walking With The Wounded

RIP Dear Kevin Always at the end of the phone to help with any issues or questions.  Or indeed a conversation about the up and downsides of owning big dogs, a shared love. Will be remembered as a super helpful colleague, who will be greatly missed by me both professionally and personally. Condolences to …
Read More

Kevin, I hope you are chuckling somewhere, with a glass of something nice and cold, as we muddle around without you.  Thank you for being our unconditional ‘go to’ person with a solution for everything – no problem was ever too big or too small. Also for quietly, but always so diligently, ‘keeping our …
Read More

Hi Kevin, I can hear you muttering about the fuss we’re making. I can see your wry smile. I can picture you popping out front for a smoke where we’d so often stand and talk, put the world to rights and chuckle at a mishap. You were, you are, an unsung hero of the …
Read More

Kevin truly was WWTW through and through.  Such a hard-working & dedicated man.  Whenever I reached out to him for help he would have the solution.  Patient, kind & caring- he’ll be a big miss. …
Read More

Oh Kevin – our Mr Cumbria!  You were one of the few people at WWTW who helped absolutely everyone in the Charity, whether it be IT issues, stationery requests, PAT testing or just being the one to pick up the phone at HQ.  Thank you for all your help, your patience and good humour.  …
Read More

Kevin, you made me feel welcome from the moment I started at Stody and I soon discovered that you were the kind of person who would go out of his way to help people – whether it was work-related or not. I miss our regular “patio sessions” when we used to put the World …
Read More

Kevin,  Thank you for your loyalty, time and friendship.  Your willingness to get involved in all areas and support the wider team was immense. You were always happy to face up to problems with solutions and a smile on your face.  You will be greatly missed by all and especially by me. Thank you …
Read More

Our Kevin, it is so very strange and very sad without you in Stody and the WWTW family won’t be the same without you. Thank you for everything, Kevin. You used to say that your job was to keep the WWTW wheels in motion and you carried out that role with absolute dedication. As …
Read More

I had the pleasure of working alongside Kevin for 61/2 years and I can truly say that in all that time I never heard him complain or utter a cross word.  Kevin was a true gentleman in every sense of the word.  No job was too big and you always knew that whatever you …
Read More

Kevin was one of the first people I spoke to at WWTW, and he was always so friendly and willing to help with any mail/IT/computer issues with a lot of patience! He embodied the spirit of WWTW, always jumping in to help wherever he could with a good dose of humour included. Kevin has …
Read More