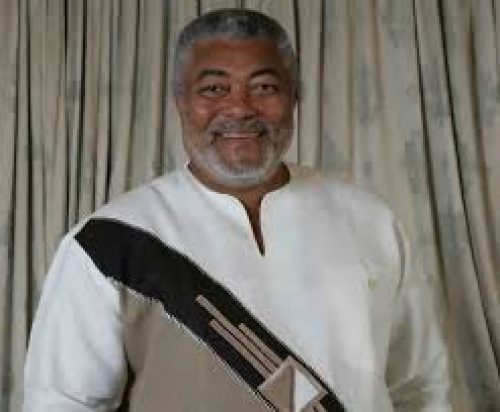 Jerry John Rawlings was the son of a Scottish father and a Ghanaian mother. He was educated at Achimota College and the military academy at Teshie. He was made a second lieutenant in the Ghanaian Air force in 1969 and became a flight lieutenant and expert pilot, skilled in aerobatics. In June 1979 Rawlings and other junior officers led a successful military coup with the aim of purging the military and public life of widespread corruption, indiscipline, and social disobedience. He and his Armed Forces Revolutionary Council ruled for 112 days, in which order was restored. Rawlings then yielded power to a freely elected civilian president  H.E. Hilla Limann who promptly retired Rawlings from the air force.

Rawlings continued to be a popular figure. However, on December 31, 1981, after two years of weak civilian rule during which Ghana’s economy continued to deteriorate, Rawlings overthrew Limann’s government, for leading the nation “down to total economic ruin.” Rawlings established a PROVISIONAL NATIONAL DEFENCE COUNCIL ( PNDC ) as the new government. He then set up Peoples Defense Committees and workers’ councils to monitor production in factories. When the failure of these and other populist measures had become clear by 1983, Rawlings reversed course and adopted conservative economic policies, including dropping subsidies and price controls in order to reduce inflation, privatizing many state-owned companies, and devaluing the currency in order to stimulate exports. These free-market measures sharply revived Ghana’s economy, which by the early 1990s had one of the highest growth rates in Africa.

In 1992, in the first presidential elections held in Ghana since 1979, Rawlings was chosen as president on the ticket of NATIONAL DEMOCRATIC CONGRESS,( NDC ) a party he founded. He was re-elected in 1996 and stepped down from the presidency in early 2001. As the father of the 4th republic of Ghana, he continues to edge his party the NDC to live and guide herself against situations that necessitated the uprising of June 4th, 31st Dec movement, and all other revolutionary journeys. He has been at the forefront of the NDC party mentoring the youth, and the leadership of the party till he breathed out his last breath.

He is survived by his wife, Nana Konadu Agyeman, whom he married in 1977, three daughters, Zanetor, Yaa Asantewaa, and Amina, and a son, Kimathi, and the entire NDC party and all allied groups, the cadres, his revolutionary friends and most importantly his party CEO, H.E President John Dramani Mahama.

Lamb of God, who takes away the sins of the world, grant Papa J rest.

Lamb of God, who takes away the sins of the world, grant Papa J eternal rest.

Let light perpetual shine upon Papa J, Lord, with your saints forever, for you are holy.

Rest in perfect peace Papa J. You will be missed. You were a dad like non.  …
Read More

Rest in peace Papa J,  your love for prohibition and accountability pave the way for peace in Ghana.  God bless you …
Read More