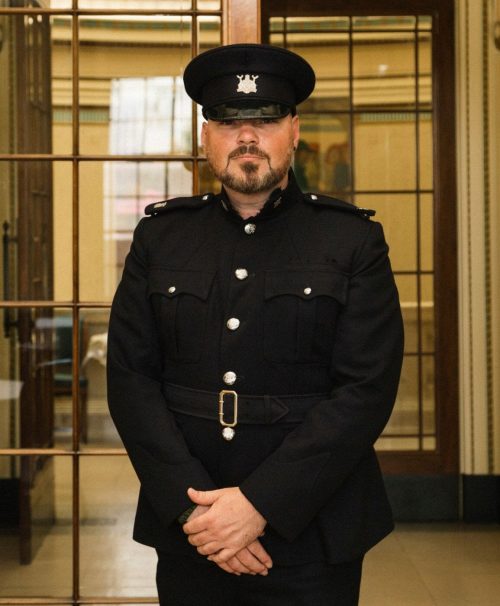 Dade’s life can only be described as the most beautiful patchwork quilt. He lead such a colourful and vibrant life and wore so many different hats. That of a magician, a master of ceremonies in Madrid, an award-winning photographer and teacher of photograpy and Community Protection Officer, to name but a few! Dade travelled the world and saw so much, did so much, and helped so many people.

Photography was one of Dade’s many achievements and played a big part of his life. Dade was a very committed, passionate, and talented photographer but there was also another life beyond the lens.

Professionally, Dade wanted to apply his extensive life skills to improving the environments he photographed and in 2019 Dade joined Nottingham City Council as a Community Protection Officer.

Dade was initially part of the City Centre Team and then later secured a position with the Operational Response Team and became well embedded into the Community Protection family.

In his first year Dade became a decorated officer and received a commendation for life saving efforts.

In early 2020 at the height of the global coronavirus pandemic Dade was selected as part of the Community Protection response to the pandemic and formed part of the COVID Response Team.

Dade worked day and night throughout the pandemic ensuring that vulnerable citizens welfare was at the forefront of his work. Dade carried out important enforcement of Covid regulations, delivered vital test and trace notifications and ensured those that where shielding had urgent medication and food delivered to them.

A year later Dade returned to the Operational Response Team where he continued his vital work in out of hours social service welfare visits, executing warrants of statutory breaches, illegal encampment evictions and investigating environmental crime, to name a few.

In the last few months Dade had been asked to work on a project to learn new regulatory skills and powers which formed part of the wider Community Protection transformation programme and would kick start the new business regulation unit, sadly this work came to an immediate stop on 27th January 2022.

Dade was a very proud man and kept his personal life seperate from work, he had a partner Sam, who he loved very much and the two had started a great life with each other.

It is clear the impact that Dade’s passing has had on the people around him. Dade’s death is not only a loss to our Community Protection family but is also a loss of a friend to many of us.

Dade, It has been an absolute pleasure to call you a friend and colleague, and words can’t describe how much you’ll be missed. I’m forever grateful that you were comfortable enough to open up to me and show your vulnerable side and I hope you knew how much I valued you. You always took …
Read More

Dade, I only knew you in a professional capacity, working along side you in the city centre for a number of years. You were always generous (especially when it came to biscuits), knowledgeable, funny and kind hearted, always putting things into perspective, or cheering us up with your sense of humour. It was always …
Read More

It was a pleasure to have known and worked with you Dade. Thankyou for keeping me company on those long cold nights doing student overtime, stepping in to partner me as I had been let down, last minute and you couldnt bear to let me go out alone. A dedicated Officer and a genuinely …
Read More

Dade was a valued memeber of the Community Protetcion. His desire to do the right thing and help people was commendable and he will be sorely missed by us all.  …
Read More

I remember Dade approaching me on Clumber Street and requesting information on how to join the Service. Months later he was part of it. This is a man who knew what he wanted and was determined to obtain it.  Rest in peace Dade! …
Read More

I personally lost a very good friend, excellent colleague and very intelligent CPO.  Dade was class, hard working CPO, very helpful. Dade – Rest in Peace and may God have mercy on your soul.  You will always be remembered in our hearts. …
Read More

Dade was a gentle engaging person. You knew when he entered a room, not in an intimidating way but in the sense that someone with real presence was with you. The city has lost a real asset but his legacy will continue and his art speaks for him.  …
Read More

We don’t often come across people like Dade, he was one of the most genuine, caring, courageous & talented guys I have ever met, we have lost one of the best. Our friendship has left me with some hilarious memories that I will remember forever. You may be gone, but you’ll never be forgotten. …
Read More

I feel honoured and privileged to have worked with you, you always set the standards by being dedicated and working so hard for the communities your were representing, you were a fine officer. Although i did not know you that well personally, you were clearly a very talented individual. You have left a big …
Read More