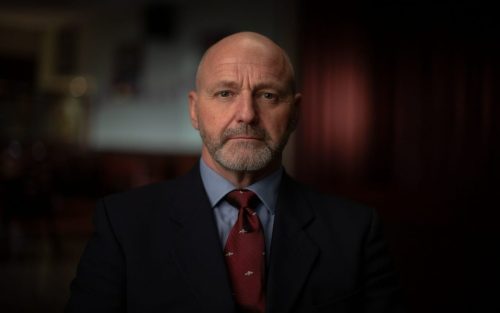 Chris was a model professional and colleague, passionate about his role at Northrop Grumman and also a great friend to so many of us. He was also a dedicated family man and our thoughts are with them at this tragic time.

Some of you may have been aware of Chris’s career before Security. He served as an Officer in the Paratroop Regiment for 24 years serving in Northern Ireland, Bosnia, Iraq and most notably in the Falklands campaign, where as a 19 year old lieutenant, just out of Sandhurst, he led his troop in a series of very notable engagements. Chris was recently interviewed by the BBC for a very powerful documentary on the Falklands War, detailing his experiences of the conflict. His heroism, dedication and the regard he had for the men he led and served alongside are palpable.

Chris lived life to the full. His passion for flying saw him compete in aerobatics competitions and displays across the UK. If we can take any solace from this tragedy it is that he died doing what he loved.

It was a privilege to know Chris and we will miss him deeply.

Hearing the unfortunate and certainly untimely news of Chris’ passing was a tremendous shock to me and I continue to process the impacts of this loss on my work and personally on what he meant to me.  Chris was a valued member of our company’s Security Leadership Team and had become more than that …
Read More

I miss Chris’ regular skype messages, they always started with a sunshine emoji.. I was so gutted when I got the trajic news, but to know he was doing what he loved to do most brought some peace as I hope it did to the family and those closest to Chris. Chris is missed …
Read More

I was so sad and shocked to hear about Chris passing and my thoughts are with his nearest and dearest at this difficult time.   He was a true professional and gentleman and as a valued member of my team I had the pleasure of working very closely with him.  He showed passion, focus …
Read More

Chris was the most approachable, friendly, professional i have had the priviledge to work with.  He could laugh at jokes and be serious when needed.  I will always remember our daily and weekly meetings as we stood up the contingency program.  He will be truly missed. …
Read More

I am new to NG so never actually met Chris in person, only via online meetings.  I am aware of the presence Chris had across the Company and that he is very missed.  Chris was obviously highly regarding at NG as well as a friend to many.  Sending my thoughts to Chris’ family, RIP. …
Read More

So sorry to learn of your passing.  You were a true professional and a real gentleman.  Fare winds and following seas. …
Read More

I first met Chris on a Zoom call, but then regularly saw him as he came into the Cheltenham Office – usually once a week. I worked with Chris closely as part of the Security team. What I will remember about Chris will be his pragmatism, his leadership, his humility and his friendliness to …
Read More

Chris was a true professional and I am so grateful to who he was, and the huge contribution he made to our organisation. He is missed regularly in the workplace, specifically his updates into our staff briefings where he brought the ‘real world’ into our everyday life – reinforcing the message to think about …
Read More

Chris, what can i say about you? Inspirational, just doesnt cut it. From recruitment to being my friend, you never stopped impressing me with your drive and humour.  RIP  Your memory lives on …
Read More

Incredibly saddened to hear the news of Chris passing and my heartfelt feelings and condolences go out to his family at this difficult time.As a fellow ES Manager I have worked closely with Chris on many topics and projects and found Chris to be passionate about his role and wanting to make a difference.As …
Read More