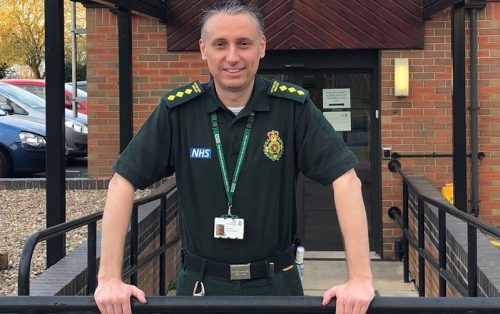 Chris was a valued member of our team for 26 years. He joined the Humberside Ambulance Service in 1995 as an Ambulance Care Assistant, and then progressed through to qualifying as a Paramedic in 2009, working in North Lincolnshire, based at Scunthorpe Ambulance Station, and also spending time at our Gainsborough and Market Rasen Stations.

In April 2020, Chris left EMAS to join the Northern Lincolnshire and Goole NHS Foundation Trust on a fixed term contract, working there until March 2021. Throughout that time, he continued to respond to patients through his Bank Paramedic role.

Chris volunteered his time to support his local community, operating as a LIVES Medical First Responder and also working in a number of roles with St John Ambulance.

As Chair of Rescue Day, Chris directed the hugely popular annual event, raising the profile of the ambulance service whilst also raising funds for the installation of public access defibrillators.

In 2018, Chris and team were announced winners of a Health Education England (HEE) ‘Clinical Team of the Year’ award, for their dedication to the HEE rotating paramedic pilot.

Chris will be missed by many at EMAS and our collective thoughts are with his family and friends at this very sad and difficult time.

Thinking of you and your family at this very sad time. …
Read More