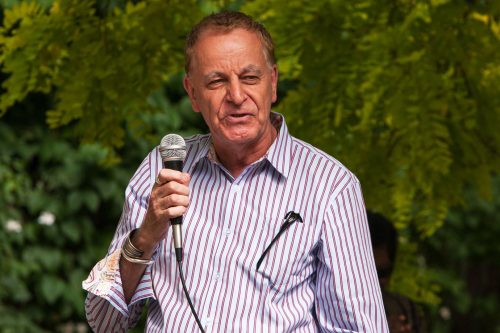 This online book of condolence has been set up to remember our dear friend and University of London colleague, Chris Jenney.

Gregarious, with an innate gift for friendship, plus a genuine desire to help students and Teaching Centre colleagues alike, Chris gave a staggering 35 years’ service to the University as a Senior Admissions Manager and, more recently, Head of Institutions. His enormous contribution to the success of the University of London Worldwide was rightly acknowledged with a special award in June 2015, at an event which celebrated the 150th anniversary of the first University of London exams to be taken overseas.

Chris will be deeply missed by us all, but remembered often with much love and affection.

Dear Chris, it was with great sorrow that I discovered today that you had passed away.   I loved working with you in Senate House, you were great fun, and then after I’d left we still met up and chatted about some of our mutual great loves: Indonesia, travel, and the arts.   You …
Read More

Chris was someone who brightened up the office, always generous to share his experience with colleagues and lovely to be around. A valued colleague who will be sorely missed.  …
Read More

Mr Chris! It’s been a privilege to be your friend and work colleague! Thanks for all the good times and the wonderful memories. Miss you! …
Read More

Just a simple thank you for being a cherished friend and colleague. You were a close confidant through all the crazy times and I used to so enjoy our conversations about work, life, the universe and everything. We miss you, dear Chris. …
Read More

Chris was genuinely one of kind and it was an absolute pleasure to have worked with him. His paper-based filing system – and his apparent ability to use it – was one of life’s great wonders, and never a day went by without Chris sharing a jaw-dropping anecdote about his life and times at …
Read More

Dear Chris, The rock for many colleagues – You are the knowledgeable of the University, the diplomatic for the University, and the supportive at the University. Challenges wouldn’t faze you; you handled emergencies with graceful ease. Crises wouldn’t hinder you; you untangled difficulties via superb communication. I am deeply grateful for your support and …
Read More

Chris is a gem. He was a good friend, and had always given great support to the college time and again. Remembering the wonderful memories when I passed the UOL applications to Chris in KL every year, the one long trip that we had from JB to KL, and the many college graduations that …
Read More

Chris was a great colleague, who always had a ready laugh and amazing taste in woolly jumpers! His leaving do was a sight to behold – with barely any floor space left! – and he will be missed by many, both at and beyond the University.  …
Read More

Chris set an example as someone utterly passionate about his work and the students. He did this with an innate professionalism and great humanity and warmth.  There didn’t seem to be a corner of this world he wasn’t familiar with and had frienmds and people he touched there. He will be greatly missed. …
Read More

Chris was already a legend in the University when I joined some 15+ years ago, and when I met him it was not hard to understand why. His passion for the University and the students was inspring and we will miss him so much. Even after he retired he offered his help and assitance …
Read More