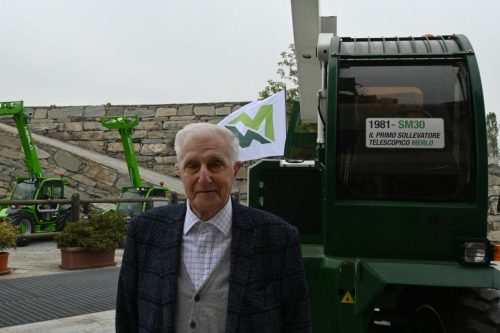 Merlo UK are deeply saddened to learn of the passing of President and founder of Merlo, Mr Amilcare Merlo at 88 years old. Our thoughts are with the Merlo family, friends, loved ones and the many people throughout his beloved local community of Cuneo whose lives he touched.

Born in 1934 on the outskirts of Cuneo, Italy, Mr Merlo began working in his father Giuseppe’s blacksmith workshop at just 14 years old, inspiring him to open the first Merlo Group production facility in 1964. Merlo Group celebrated their 50th Anniversary in 2014, marked by their recognition in the Italian register of historic companies. The following year, Amilcare and his sister, Natalina, were awarded honorary citizenship of the city of Cuneo.

In a speech delivered while accepting an honorary Master’s degree in Mechanical Engineering at the University of Turin, Mr Merlo addressed the audience of students, “I say have the courage to dare, those who do not dare will never receive anything. Be curious and, even if it requires sacrifice, don’t stop at the first defeat. This recognition is a great satisfaction, the fulfilment of a dream for me who have always considered myself an engineer of the land.”

My sincerest condolences to all of the Merlo family. It has been such a pleasure and honour to be able to meet and work for Mr Merlo. His drive and determination of growing the Merlo Group has been an incredible achievement and a huge aspiration. A leader of innovation and safety across a number …
Read More

I can honestly say that i have never met anyone quite like Mr Merlo, truly inspirational and innovative, his entusiasm and passion was clear to see in every conversation. In a recent meeting with Mr Merlo he addressed not only the UK team but also our partners and wives, during his speech it was …
Read More

For those of us that had the pleasure to meet Mr Merlo, it was without doubt a meeting you would never forget. His wise words, wit, charm and overiding determination to continue devlop & innovate was unequalled. I can honestly say I have in my career met only a few people that left me …
Read More

Very sad to hear about the loss of Mr Merlo. My heartfelt condonlances to all this family and friends.    …
Read More

My heartfelt condolences to Silvia, Paolo and the rest of the Merlo family. I have fond memories of Mr Merlo, whenever I visited the factory over the past 18 years. He would always make a point of coming to say hello even if briefly at times as hes was always such a busy man. …
Read More

Very sad to hear of the passing of Mr Merlo, my heartfelt condolonces go to all of his family and friends. He will be greatly missed by everyone. …
Read More