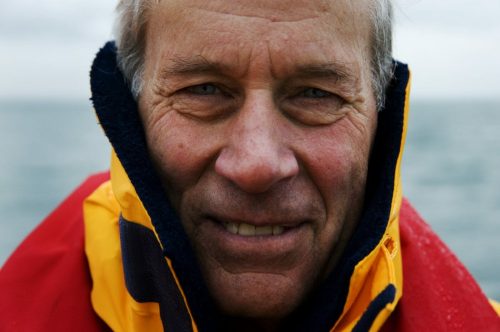 Lord Boyce, or Mike as he was known amongst RNLI friends, had a distinguished career in the Royal Navy during which he commanded three submarines from the 1960s until the early 1980s, leading to him being promoted to the Flag List in 1991. His senior RN roles included Commander-in-Chief Naval Home Command and Second Sea Lord, Commander-in-Chief Fleet and First Sea Lord. He was knighted, held several NATO positions, and headed up all of the UK Armed Forces as Chief of Defence Staff.

After an impressive naval career lasting 42 years, Lord Boyce retired in May 2003, but his busy schedule continued. He was appointed Lord Warden of the Cinque Ports and elevated to the peerage. Having been a RNLI member for several years (following the dismasting of his Hobie Cat off the east coast of England in the mid-1980s when a lifeboat came to his aid), Lord Boyce joined the Council in 2004. He was elected as RNLI Chairman in July 2009 and remained in this position until July 2013, when he was made a Vice President.

Mike and the RNLI

One of Mike’s first duties as Chairman of the RNLI was speaking at the dedication ceremony of the RNLI Memorial at Poole. Funded by supporters and staff, the memorial is a reminder of the extraordinary sacrifice shown by many people involved with the charity.

Mike helped steer the charity through the stormy economic climate following the financial crisis of 2008, oversaw a growth in water safety programmes, and the foundation of the RNLI’s international work, helping to tackle the global drowning problem. He was also instrumental in a crucial development period of the Shannon class lifeboat – the charity’s most advanced rescue craft.

During his watch, there was substantial expansion of the RNLI Lifeguard Service across the UK and Channel Islands. At the start of 2008, RNLI lifeguards patrolled 110 beaches and by 2013, they were providing a service on more than 200 beaches. But perhaps the charity’s most significant achievement during his tenure was the build of the All-weather Lifeboat Centre, the charity’s own lifeboat production and maintenance facility, which brought all-weather lifeboat manufacture in-house for the first time. It helped to secure the future supply of RNLI all-weather lifeboats and gave greater control over future costs and quality.

Mike greatly enjoyed meeting thousands of RNLI volunteers while he was Chairman, attending many naming ceremonies and events, including the opening of a new lifeboat station at The Lizard and several RNLI annual awards’ ceremonies. He particularly cherished the memory of RNLI lifeboats taking part in Her Majesty Queen Elizabeth II’s Diamond Jubilee Pageant on the Thames in 2012.

Reflecting on his years in the role when he stood down as Chairman in 2013, Mike said: ‘I will always feel proud to be part of our charity; and forever will be touched by the generosity of our people, whether they give their time, talents or financial support – all for one noble cause: to save lives at sea.’